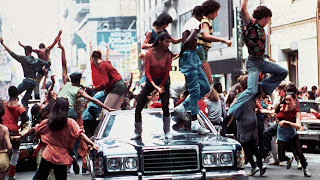 Because it would have been Gene Anthony Ray's birthday today, Susan Omand remembers Fame...


“Fame. I want to live forever”

In 1980, an American high school film came out that was like no other before it. Centred around the New York High School for the Performing Arts, it followed a group of students and their teachers from the initial auditions right through the four years to graduation and covered a lot of hard hitting subjects in a way that was nowhere near as sanitised as other films around then, resulting in it getting a 15 rating.

However, this is not an all singing, all dancing musical feelgood froth film like Grease, it’s a film about singing and dancing, and acting, which has performance and the desire for success at its core. Think of it as the Whiplash of the 1980s, with the teachers pushing students to be as good as they can be, as good as they need to be to achieve their dreams, by any means necessary, with students trying to maintain and follow those dreams without giving up and with everyone trying to cope with the stuff that life throws at them in the meantime, including failure. Fame manages to maintain a gritty realism throughout, thanks to the lack of fear in the writing and directing and the huge talent of the cast, most of whom were young and/or relatively unknown at the time. As well as all the usual pressures of academia, the weight of expectation and self esteem issues evident in so many high school films, the script covers illiteracy, homosexuality, seduction, bullying, suicidal depression, religious bigotry, pornography, exploitation, drink/drug use, pregnancy and abortion all within a single film of just over 2 hours. We have human interaction, and the resulting impact, at its best and at its worst. Not everyone gets the “happy ever after” ending that is so common in Hollywood these days, many dreams and lives are shattered for the few that actually make it. And even when people do make it, there are times when the success itself is the top of a downward spiral. But also within that timeframe we have a very accurate and utterly inspirational portrait of dedication and determination, the steel required in addition to the talent if you’re going to be a success in any industry.

Don’t write this film off as just a fore-runner of High School Musical and the likes and DEFINITELY don’t watch the 2009 remake in preference to it - with bad acting, bad casting and really bad subplots it doesn’t come close. Yes, the original film won awards for its music, including Oscars for the score and best original song, and several of the songs hit the charts. It also spawned a couple of spin off TV series, a musical and could well be thought of as the start of the “live your dream” style of films and television. But there’s one thing you have to remember ...

“You want Fame? Well Fame costs. And right here is where you start paying... “