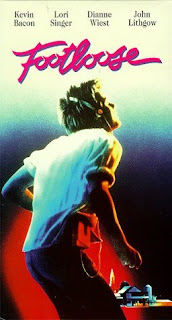 Stuart Mulrain is seven (dance) steps from Kevin Bacon as he reminisces about Footloose ...

“I’ll tell you something. If I gotta get up in front of that council, you gotta learn to dance!”

I first discovered Footloose in 1993 when I came home from school to find my Dad and brother - stuffed full of cold - sat on the sofa watching it. At first glance it didn’t look very good, but not wanting to go and do my homework (or whatever after school chores I had that day) I pretended I was interested in watching it. My first thought was “shit these kids are taking dancing way too seriously”, but gradually I found myself warming to it and then the music started. I’m honestly not sure if I fell in love with the film first or the soundtrack, but by the end of the movie I was hooked. That next weekend I watched it again (this time from the beginning) and then again the following weekend and then recorded it for myself the next time it was on TV (the BBC used to show films quite regularly back in the day) and was then watching it at least once or twice a week.

Not long after that, my Dad bought the soundtrack on CD (which I copied onto cassette until I finally bought my own copy when the 15th Anniversary CD came out) and from that point I was pretty much watching or listening to Footloose most days. Now I will freely admit, that I had something of an unhealthy obsession with the film (if it wasn’t for the arrival of Lois & Clark – the Pilot of which coincidentally shares a song with Footloose - on BBC One in January 1994 I would’ve been lost completely!), but there was something about it that just connected with me and has stayed with me ever since.

For those who don’t know (fair warning, there will be spoilers in this piece); Footloose tells the story of Ren (Kevin Bacon) an outsider from the big city who is forced to move to a small town with his mum. Ren is a seemingly normal kid, who above all loves music and dancing has unfortunately moved to Bomont, a small, (very) religious community that has outlawed dancing and isn’t particularly keen on rock/pop music either. Not one to take this kind of thing lying down, Ren decides to fix the town and change its outlook on the subject by rallying a group of fellow high school kids to help him convince the town to let him put on a high school dance.

As a teenager, the youthful optimism and determination of Ren and his friends connected with me and I was filled with that youthful optimism that you can do something great with the right support and drive to fight for it, even whilst the adults in life try to keep you down and grounded in the real world. As an adult and a parent, I find myself with a better understanding of Lithgow’s Reverend Shaw Moore and his (mostly) misguided attempts to do what he feels is best for his daughter and the towns children as a whole. I relate to his eventual understanding that at a certain point you just have to hope that your children have understood at least some of what you’ve tried to teach them and allow them to make their own mistakes. Or to quote his final sermon to the community; “If we don’t start trusting our children, how will they ever become trustworthy?” 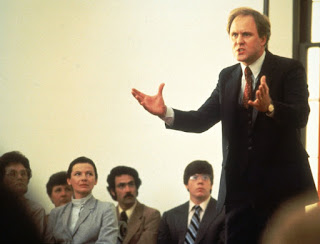 As a teen I was completely lost in Ren’s eventual victory in putting on the dance and winning his fight. It took me a few years for it to dawn on me that he doesn’t actually win his fight. Yes he does put on the dance, he only does so through compromise. In the end, Ren fails to convince the town to lift the ban on dancing and allow him to put on the dance within the towns limits and instead - through a loophole and with the blessing of Rev. Moore - puts it on in a warehouse that technically falls under the legal jurisdiction of the next town over (where dancing is legal). It’s a victory through compromise, but when I’m Free (Heaven Helps The Man) by Kenny Loggins begins to play under Rev. Moore’s last sermon, leading to a montage of the kids working together to set up the dance you feel the win, a feeling that is cemented by the look on Bacon’s face as he looks over the finished set up.

Footloose has endured over the years, still holding a place in people’s hearts and in pop culture in general, with references and skits appearing in the likes of Hot Rod (Rod’s Angry Dancing in the woods), Guardians Of The Galaxy (“We’re just like Kevin Bacon”) and in the Tricky Dick episode of 3rd Rock From The Sun; in which Lithgow (as Dick Solomon) delivers a variation on his opening sermon from Footloose. Even Bacon himself has parodied the film in an episode of Will and Grace and a skit on The Tonight Show with Jimmy Fallon. In fact, if there was something all 3 seasons of The Following was lacking it was a scene in which Bacon broke away from the case and went to do some angry dancing in a warehouse!

Beyond this and the continued popularity and appeal of the films soundtrack, the film itself found a second life on the stage, where it was adapted into a musical, using the songs from the film and some new specially written ones for the show. Despite always being curious to see what it’s actually like I’ve never been able to bring myself to watch the musical, but with a version of it touring the UK again I may actually bring myself to settle my curiosity and watch it. The musical was set to follow in the footsteps of the likes of The Producers and Hairspray and be adapted into a musical remake for the big screen.

The big screen musical was touted as a vehicle for Zac Efron - hot off the heels of his High School Musical success – but eventually was adapted as a straight remake (with some tweaks) written and directed by Craig Brewer (Hustle & Flow) and starring Kenny Wormald (as Ren) and Dennis Quad (Rev. Moore). Although not a box office smash (it did okay) the film is a fairly respectable remake, if not a success in its own right, making some quite nice additions to the story and some horrible changes as well.

For me though, if it wasn’t for Footloose I probably wouldn’t have ever gotten round to reading Slaughter House 5 (A classic “in any town”) or watched Tremors (I went on a Kevin Bacon binge) or 3rd Rock From The Sun (or read Lithgow’s memoir Drama – a great read if you’re interested in such things). Footloose is my go to film when I’m ill or feeling crappy, it’s the film that reminds me to keep pushing forward to try and do something great with my life, be it small or large. It’s the film that inspired me to replace a dance with my love of comic books and put on a comic-con in my hometown (well, like the film, I technically put it on in the next town over).

The great thing about the movies is that they show you how things could be if you try and they do it by lying to you when you need them too and reassure you that, whilst not exactly the same, if you keep pushing forward, you will get there in the end (with a compromise or two). Everybody needs that film that inspires them to be or do something in life, no matter how large or small. If you’re lucky you’ll find a couple that inspire you in different ways and keep you dreaming and pushing yourself towards that great moment in your life.

Footloose is that film for me and, for me personally, there is no higher praise I can give it.