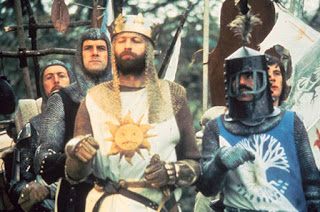 Our small band of Gunters here in the /G-f universe are reviewing every film mentioned in Ernest Cline's Ready Player One. This week Steve Taylor-Bryant with his thoughts on Monty Python and the Holy Grail...


Project RPO gave me an excuse (like I need one) to dig out my Monty Python collection and sink back into the lunacy. Lunacy is a great word and I think it was invented in 1975 just to describe what the comedy troupe did with Arthurian legend, because it really is just complete insanity transferred to film and yet works and works so well that, forty years later, it hasn't dated at all and is still funny and still surprising. As well as taking the much loved King Arthur to the screen and extending the Flying Circus sketch show into a feature length project, the guys also include the bits of comedy that started on radio with them. If you are on a horse on a radio sketch you have a man making clip-clops with coconut shells and wouldn't dream of ever doing that on screen unless you are Messrs Chapman, Gilliam, Cleese, Idle, Jones and Palin because they can make it funny. Yes, okay, the humour isn't for everyone and it really is quite in your face with stupidity but for me, even after multiple viewings, I'm still in awe at how cleverly they make simple things humorous.

Chapman plays Arthur with an innocence and optimism that is funny in itself and trots around the kingdom on his quest to find the Holy Grail whilst the rest of the cast pop up all over the film in various guises. This was certainly a change from TV and from And Now For Something Completely Different and would lay the foundations for The Life of Brian which is equally as funny and possibly more popular with people due mainly to its content. The sketch show feel doesn't disappear though with regular jokes and scenarios stitched into a very loose story structure that has a beginning, a middle and stops rather than has an ending. This format allows the humour to work throughout as the viewer isn't laughing at one long joke or waiting 90 minutes for the set up, it's rapid fire and makes you cry and hurts your ribs.

I really appreciate Holy Grail now, as an older man, and 'get' the jokes that maybe I missed earlier in life and it's definitely a film for a more mature mind unlike Brian which is schoolboys taking the piss out of religion.

I don't want to talk to you no more, you empty-headed animal food trough wiper! I fart in your general direction! Your mother was a hamster and your father smelt of elderberries!