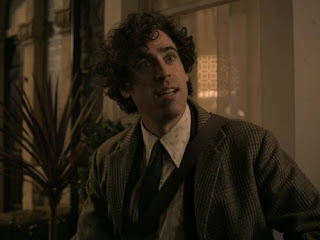 For Towel Day, Steve Taylor-Bryant gets excited about a new TV adaptation of a different Douglas Adams book, Dirk Gently...

“If everyone knew exactly what I was going to say, then there would be no point in my saying it, would there?”

I love me some Douglas Adams. I'm not however like most of my colleagues here. I don't own a special towel. I can't quote, and they do - endlessly, from The Hitchhikers Guide to the Galaxy. I don't remember the radio show. I barely remember the television version and I really enjoyed the film. No, I came to Adams via Doctor Who, and a book published in the late 1980's called Dirk Gently's Holistic Detective Agency. Like all good books you don't have to read it as it was made into an incredibly enjoyable television show starring Stephen Mangan and Darren Boyd. Then however in the networks "wisdom" it got cancelled. Killed before it really took off and treated really shabbily, so maybe you will have to read the book after all. No! Wait! A Hollywood star has got involved so now we are going to get a lavish and expensive attempt! Hmm, but American? Maybe we should read the book.

On a more serious note and before I start waxing lyrical about something not even made yet, you should all read the books to get the essence of what Douglas Adams was about. No film, radio, or television show will compete with the words that came straight from the genius mind and onto the page, but that doesn't mean there isn't beautiful things created in his image. I know people who work for this very site that really didn't like the Stephen Mangan show, I've discussed at the top of this article that each of us loves a different version of The Hitchhikers Guide to the Galaxy, and adaptations are not always what we expect them to be. So... Last chance to read the books before I start?

Oh good some of you are still here! Before I get to the crux of my excitement, the casting, I think it's important to look at the man charged with stepping into Douglas Adams very large shoes. Max Landis is a great writer but not one whose track record would excite many people. Chronicle was a superb film, Victor Frankenstein was highly watchable, but American Ultra wasn't as great as I'd hoped it would be. However he has quite the hold on Hollywood with Netflix buying scripts from him, David Ayer wanted to direct his projects, and golden stars like Will Smith expected to take roles that should propel Landis into untouchable stardom. Which leads one to think 'why would he make a TV show based on a British book that all Brits don't even like?' Well, passion. Landis wants this gig, he loves the source material, Americans for some reason hold up our comedic talents as icons when we don't always 'get' the stuff ourselves, and he can attract the right calibre of star to get a project greenlit which is what he's done with Dirk Gently.

The first position cast is that of the sidekick, Todd, which is in my opinion the most important role, the role that allows Gently's madness to run riot whilst grounding the titular hero in a world we the viewer can understand. You need a versatile yet brilliant actor to portray Todd, one that lift the darker moments, allow the humour to be thrown in his direction, and one that can act as a perfect foil for the main guy to allow that man to just go nuts. Enter perfect casting choice Elijah Wood! Wood is dramatic, has impeccable comedic timing, and has shown time and again with his role choices that nothing scares him and he can carry any weight of expectation on his relatively young shoulders. He has held up huge franchises, he has lifted small or independent projects into the limelight, and in all that time whatever role he has played he has made every project better for his involvement. He is an actors actor and one that every star either wants to be or be near and he is very good at sharing his wealth of knowledge as well as his screentime often letting the more unknown cast members in something garner a little of the glory themselves which is essential when you look at the casting for the holistic detective himself.

I'm not completely familiar with Samuel Barnett. I know he's a rising star within the British film industry and I have enjoyed him in shows and films like Twenty Twelve and The History Boys but should I ever have been in charge of casting something I'm not sure I would ever got around to naming him in anything but a bit part. This is a huge opportunity for Samuel to take on a leading role, in a show which will because of Elijah's importance and the American financial muscle get a bigger and more deserving audience and whilst some may see this piece of casting as a risk I see it as exciting.

Two quality actors, a writer and production team that really understand the characters they are bringing to life? Sounds like the British version doesn't it? Except this time it will get treated well as the BBC aren't involved, it will be funded well because the Americans never cut corners on television budgets, and it will bring Adams back into people's lives which is always a good thing!

Or you could read the books.