Audio - Doctor Who: Deimos/Resurrection of Mars 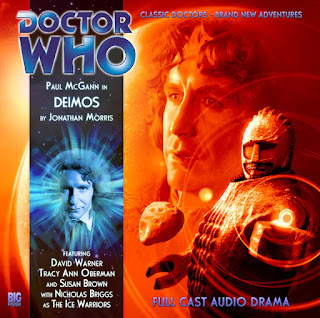 Our Doctor Who audio expert, Tony Cross, delves into the back catalogue available from the Big Finish website. Today is the Eighth Doctor two-part adventure Deimos and Resurrection of Mars...

Deimos - Resurrection of Mars sees a kind of ending to the Eighth Doctor and Tamsin story, the re-introduction of Lucie Miller and a further bout in the battle between The Meddling Monk and The Doctor. Indeed I get the impression that these little skirmishes, which have been fought on and off 'screen' since Situation Vacant have a little while to go yet. At the end of this story the Monk is determined to have another go, describing this as 'a test run'.

What's great about these episodes though is that it really does put the Doctor's morality to the test. One after the other each with bigger stakes. Is one life worth 600? Are 600 lives worth 300,000? Are 300,000 worth 20 billion? The Eighth Doctor is tested. He's tested by the Ice Warriors, by the Monk, by Tamsin and by Lucie.

The Monk has an alternative approach. He believes that the end justifies the means but the Eighth Doctor doesn't. Even if he is aware that he wasn't always like that. In fact there's a great line when he says - to Lucie if memory serves - that "he used to be that guy" referring to the darker, more manipulative Seventh Doctor. He talks about how he started to count and ask whether twenty deaths were justified if they're sacrifice saved a million others. It's an echo of what we'll see in the television series about The Time Lord Victorious. There are a lot of fine scenes here discussing the price you're prepared to pay. Perhaps the most moving moment, partly because it is almost a throwaway, is when the Doctor says (and I paraphrase) "I'm prepared to risk my own life because it is mine to give."

So this story, although it is ostensibly about saving the Martian colonies from Ice Warriors determined to re-capture the red planet from Deimos, is actually about the Doctor's morality. And his choices. 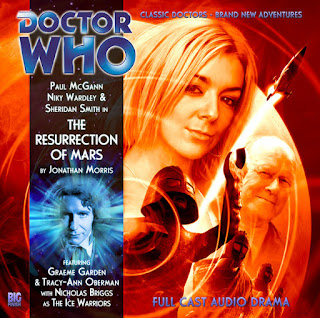 The humans have kindly put a whacking great sonic device on Deimos intending for it to be used to terraform Mars, although (sadly) they've run out of cash. Unfortunately sonic devices and Ice Warriors go together like cheese and pickle, although they're aren't supposed to be any Ice Warriors awake at this point. They're all tucked away sleeping. However the Monk has woken up a few early. He says - to both Tamsin and Lucie - that this is because he wants to save Halcyon. The planet the Martians will destroy to make their New Mars. The end - saving twenty billion Halcyons - justifies the means to the Monk. If three hundred thousand Martian colonists have to die then so be it. It's morality as mathematics.

Except there's the web of time to think about. And the Doctor thinks about it. The Monk doesn't care. He wonders if it is just something Time Lords talk about in order to justify their lack of involvement in the Universe. Does it really matter? The Doctor thinks it does. And - after a bit of manipulation by The Monk - Tamsin disagrees. Somewhere in this story Lucie Miller leaves The Monk and Tamsin leaves the Doctor. There's a bit of companion swapping going on here. And getting Tamsin to leave the Doctor is The Monk's victory in this story.

The Doctor wins, as usual, but there is a price to pay. People die. They die because the Doctor chooses to save Lucie. The Doctor justifies this by saying that the Martians would have killed them anyway but I don't know if he believe that or if he's just saying that to make him and Lucie feel better. The Doctor's 'victory' helps terraform Mars and brings about the history that is supposed to happen. That means somewhere along the line a terrible crime is going to be committed that the Doctor can't - indeed won't - try and stop.

Doctor Who often pits the Doctor against those who feel the end justifies the means because The Doctor doesn't - usually - operate that way. This is a fine example of that.

There's some fine performances too.

Tracy Ann-Oberman as the magnificently named Temperance Finch; David Warner as the deluded Professor Boston Schooner and Nicky Henson as Gregson Grenville. There's a rather lovely 'ordinary couple' Margaret (Susan Brown) and Harold (Nick Wilton) whose role really is to give us someone to feel really attached to for nefarious authorial purposes.

Nick Briggs does vocal duties on the Lord Sardak - if I've spelt that right - our resident Ice Lord as well as various other Ice Warriors. It is a well-known fact that Nick Briggs is contractually signed up for voices for almost all Classic Doctor Who monsters. Somehow the Sontarans escaped him.

Niky Wardley is excellent as Tamsin, especially as she argues with and about the Doctor's morality. I still wonder if Tamsin's a bit too naive as she seems to buy into the Monk's view of the Doctor a little bit too easily. But then it does seem less cold than the Doctor's 'alleged' view of the Universe. The Monk seems to offer the option of making a difference, whereas the Doctor doesn't but what I don't understand is that she's already seen The Doctor in action inSituation Vacant, Nevermore and The Book of Kells so why does she forget or ignore what he did there? And she's seen the Monk's is - if nothing else - a bit of a devious git in The Book of Kells so her buying into the Monk's story is the only odd note in the whole thing for me.

Graeme Garden makes a tip-top Monk too. He manages to balance the comic with the serious and has a nice edge in Sylvester Sneakly style villainy too, which in my opinion is perfect for the Monk.

It's nice to have Sheriden Smith back. I have developed some affection for Lucie Miller's northern belligerence, which comes across particularly well in her little clash with Tamsin towards the end of The Resurrection of Mars and it is also nice that they didn't just slip her straight back in without a little awkwardness between her and the Doctor.

Paul McGann's brilliant in this. His Doctor has a certain effortless cool that I admire. It's a laid back, chilled out masterpiece. You don't need ridiculous amounts of pyrotechnic voice work to do a great job in Doctor Who audio. The Eighth Doctor's power is understated, which I quite like. So when the big moments come they feel big. It's such a shame he never got a proper shot at the television series.

Phew. That took a while.

Skip to the end.

It's good. Give it a listen.