Book – The Fall of the House of Murdoch 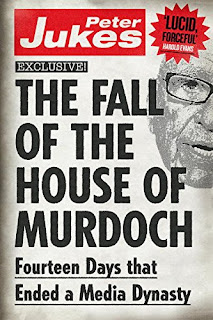 A while back I saw a link for a crowdfunding campaign. This in itself isn’t a strange occurrence, I try and invest in as many exciting ideas as I can afford, and I am always trying to help folk get the word out about their newest venture. This one was different though. It was for a man I only know as a television writer to be able to afford to sit around and live tweet a court case. Sounds strange doesn’t it? That man though was Peter Jukes who wrote some Waking the Dead episodes I’d enjoyed and created the show In Deep which was also great television. Jukes wanted to be able to commentate on Twitter from the beginning to the end of the News International trial that saw Rebekah Brooks and Andy Coulson in the dock for phone hacking. I couldn’t invest financially at the time but it was certainly a period of the United Kingdom’s history that fascinated me (anything involving corruption and the media doing something a bit dodgy peeks my interest) and I vowed to follow up on Jukes' thoughts at a later date. Well now I can as I have read his book on the events, The Fall of the House of Murdoch: Fourteen Days That Ended A Media Dynasty.

I’m not a fan of Murdoch personally, I have always found he comes across as quite abrasive. However, whilst I don’t buy any of his newspapers I do make a monthly investment into his coffers through my choice of television provider, so obviously I don’t hate the Murdoch empire as a corporate entity that much and I feel it is important to make the distinction. Therefore I hope that, when I review anything as divisive as Murdoch tends to be, I can do so with an open mind and with no prejudice either way. I think it’s necessary to state these things upfront so that if any of you are reading hoping for some kind of bias either way you can stop reading now. My judgement here is on the work of Peter Jukes and not any thoughts I may or may not have about Rupert Murdoch and the characters contained within the pages. Maybe this paragraph should have been as small as a newspaper retraction apology?

Anyway, to the book and the first thing I enjoyed is how refreshing it is to read something by someone who is not covered in Fleet Street dirt. This was not a Guardian piece written from the moral high ground, nor was it a finger pointing 'look at them' expose from the Mail or The Mirror Group. Peter Jukes commentary from the start comes across as well educated, researched well, written with very little malice, and quite amusing. Humour is often missing from non fiction books and I wish more writers would include it as it often helps to swallow the bitter pill that is the crux of the piece, in this case the revelations that the News of the World hacked the mobile phone of murdered 13 year old schoolgirl Milly Dowler, a fact that shows in itself how much we have become immune to the media as this was not as surprising as it was sickening.

The book, whilst marketed as being about the two week period that saw the world’s biggest selling newspaper close its doors, is more than that. It shows how Murdoch started, came to these shores and bought our media, how he changed the news to a more scandal and gossip driven one starting with the diaries of Christine Keeler forty odd years ago. It was about how Murdoch and his style and demands for power infiltrated big business and politics, and how his personality changed those that worked closely with and for him, the likes of Rebekah Brooks. Brooks comes across in the pages as a power hungry celebrity whore with an evil edge and, to be fair here to Jukes, I imagined her to be exactly that before I read the book.

The book probably won’t tell you anything new about Murdoch, it doesn’t go into encyclopaedic or academic detail on the trial itself that saw a shocking revelation close an institution, and it won’t change any opinion you had going in about whether you like or dislike Murdoch and his cronies. What it does do though is it puts front and centre the argument that our media has changed forever, that the clickbait society we live in now started somewhere, and it opens the argument up that our media now drives our morals and not the other way around. It does all this with a brisk pace, educating and amusing in equal measure. For those who want something put together from outside the immediate newspaper world this is a great read.