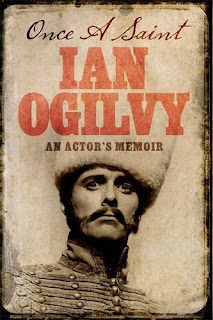 Our own saintly Barnaby Eaton-Jones reads the autobiography Once a Saint (An Actor's Memoir) by Ian Ogilvy and chats to the man himself, yes, we have an interview with IAN OGILVY!...

A son of an Advertising Executive and clearly someone from a privileged (but not too privileged) upbringing, Mr Ogilvy has the lightness of touch and sharpness of tongue to create humour where there is sadness and make you feel like he has floated through life with a bon mot for every occasion. There's a waspish Noel Coward-like turn of phrase in his descriptions and brevity of summing up situations. These are not – as he claims – just a series of stories told over and over again, to the mock annoyance of his third wife, Kitty (the object of many an amusing Facebook status update. And, if you don't follow Ian Ogilvy on Facebook, then you're missing a treat). No, these are clearly honed vignettes in the form of witty recollections that are hung on the structure of his timeline with perfect plotting.

From a love of acting at Eton, where others were expected to become David Cameron and Boris Johnson (heaven forbid), Mr Ogilvy avoided making love to a porcine decapitation or sounding like an English version of Donald Trump, and – instead – drifted through education without any embarrassment and ended up acquiring an encyclopaedic knowledge of motorbikes instead. His absolutely spot-on turn as Grayson, the School Bully, in Michael Palin & Terry Jones's classic Ripping Yarns series episode 'Tomkinson's Schooldays' clearly was formed from memories of Eton. It's a sublime masterclass and he delivers the witty lines of disdain with real relish. It was clearly as fun for him playing the role as it was for Palin and Jones to write such a satirical parody. There's an air of that sense of absurd fun dotted all through Once A Saint and it's a book that is at turns surreal and other times laugh out loud funny. As evidenced by the quote from the book at the very start of this article, there's a Pythonesque vein running through the memories.


Coincidentally, for a man who suggests that the real reason he was cast as Simon Templar, in Return Of The Saint, was because the wife of the producer thought he looked like Sir Roger Moore (the previous Saint), it's clear that Mr Ogilvy possesses that quintessentially Moore-esque quality of self-deprecation and sense of Englishness - coupled with a complete avoidance of being hit with the Ugly Stick - that made Sir Rog such a star. Maybe because of the stranglehold of the halo, Mr Ogilvy didn't rise to the level of fame he deserved but it's abundantly clear he's loved every minute of whatever he's turned his hand to; whether it be film, theatre, television or writing.

The background to his family and various relations is fascinating, especially with the role they had to play in World War II, and his recollections of working with famous names – often who would ignore him before he'd made a name for himself – is always truthful and honest. My personal favourite section is in relation to the noted wordsmiths Simon Gray and Harold Pinter, where Mr Ogilvy inadvertently sparks off an argument that rages to a spectacular end. There's two sets of photographic pages, with some great images picked to represent his life, and he writes about events so well that you wish you were present. Even starving and staggering around Rome on his own, in his first film role, sounds more romantic than the hardship it clearly was. By his own admission, he became a better actor as he career progressed and – and he became successful – his looks were often a hindrance for branching out into roles he would've liked to play. There are a couple of fascinating moments, with regards to farcical theatrical productions, that make intriguing reading – especially the reasoning for Michael Crawford not transitioning from the stage role he made his own (in No Sex Please - We're British) and the film version that had Ronnie Corbett play opposite Ian Ogilvy instead.

It's difficult to make an autobiography light enough to not feel taxing, deep enough to not feel shallow and interesting enough to read in one sitting, but Mr Ogilvy has managed to balance those things perfectly. It will, of course, be more interesting to those who love the Arts and that's understandable. You don't expect an autobiography of William Shatner to appeal to people who've never heard of Star Trek. However, there's plenty of social context and historical intrigue to make this a solid read even if you've never caught one of Mr Ogilvy's performances or read any of his successful previous books (of which, Loose Chippings is my favourite) or seen any of his plays.

So, for his open honesty, his self-effacing manner and his air of dry wit, this is definitely up there with the self-penned memoirs of the Nivens and Ustinovs of this world, as opposed to the self-helped cash-grabs of others. 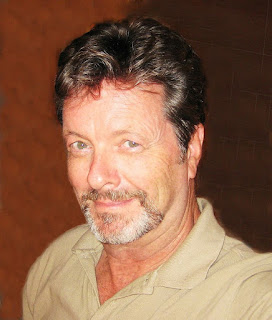 Barnaby Eaton-Jones: Hello, Ian! Had you ever attempted to write your life story before or did you have to be persuaded to sit down and collect all your memories in one place?

Ian Ogilvy: Never been tempted to earlier than now because I feel you need a lifetime of material before you can start an autobiography - in fact, I was casting about for a project to continue my fiction writing career and realised that I already had a plot ready and waiting although none of it was fiction - well, not much - and I also had a treasure trove of material because of the extensive scrapbooks about me I always kept - so the writing was easy and a pleasure and was done fairly quickly - about 9 months I think.

BEJ: At times, I suspect, the Simon Templar halo sat heavy on your head - especially with the inability of casting directors to see your potential. Did you ever feel annoyed and, if so, when did you make peace with something that will, rightly or wrongly, be the thing you're probably most famous for?

IO: Never annoyed by ST. Occasionally a little glum at the thought of how few episodes we made in comparison with RM, and sometimes a bit angry with Lord Grade for cutting us off in our prime so to speak - but in the long run very grateful for the show itself because it put me in a driver's seat for so many other projects and made me, in the eyes of a few people, one of the several 'iconic' characters of the 1970s/1980s, which has proved not un-useful at times - such as this, when I get a memoir published by a prestigious publishing house. I think I'm a bit of a fatalist - it is what it is, whatever that means, and there's no point in crying over what can't be changed. And why would I cry about being the Saint?

BEJ: Your family sound, quite frankly, rather amazing. Did you ever secretly yearn to follow in the footsteps of your Aunt or your cousin and be an undercover operative or was that a discovery you found out later in life?

IO: No, never wanted to be a spook. Remember, my family were only engaged in Intelligence work during wartime - they never made a peacetime career out of it and, in fact, got out as soon as they could. It's interesting to note that large numbers of wartime Intelligence operatives were rank amateurs who turned out to be good at the work - like my father, who was recruited because he was a classics scholar from Cambridge (the Old School back door) who then recruited his soon-to-be sister-in-law because he had a hunch she might be good at it - and she was. They both were, but their talents were only required for 6 years and after that it was back to civilian life - so I was (a) too young at the time to know what they were up to and (b) had I known, I don't think their engagements would have lasted long enough to tickle my interest.

BEJ: For someone who is such a good writer, who's writings do you admire? And whose autobiography have you read that you'd consider a 'classic'?

IO: Thanks for the compliment. I've had a lot of practice. Two novels and five children' books published - three novels unpublished - and now the memoir - so I would hope I'd have developed a small talent at it. I admire writers such E.F. Benson, P.G. Wodehouse, Evelyn Waugh, Nancy Mitford, Saki, Graham Greene, (these are all really old!) I'm currently enjoying Bernard Cornwell, I don't like Hemingway, I loved David Niven's autobiographies of course, and those of Dirk Bogarde, Cedric Hardwicke, Alec Guinness - and I'll happily admit to thinking that George R.R. Martin is terrific and JK Rowling is a great storyteller although I'm not quite such a fan of her style.

BEJ: If demand is there, do you think you'd produce another volume of memoirs, covering your time in the USA?

IO: Right - IF the demand is there ... well yes, but I think the book about my American life would be more of a comment on how the cultures differ/are the same and how utterly baffling so much of it remains, particularly if you're a Brit, with whom Americans have such confused relationships - I think I'd concentrate on my bewilderment as to how I ended up here ... it might be funny. Hope so.