Book - Walk With Us: How "The West Wing" Changed Our Lives 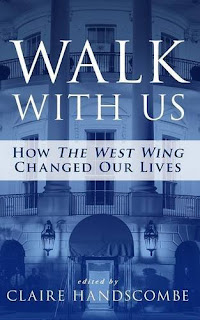 Steve Taylor-Bryant takes a walk through the corridors of power and reads the memories of some of the fans of The West Wing in this new anthology from Claire Handscombe...

Fan books compiled by fans are often hit or miss. I've read lots that had something in them that I enjoyed, and lots that maybe would have been better as blogposts you didn't have to actually use cash to get, but all of them are done through love of something so they all have a place in the world. Too many though are collections of lists. Favourite episodes of certain seasons, page upon page of 'who was the prettiest star' or arguments for and against a certain actor. Not many are personal. I don't mean that your favourite star page wasn't a personal opinion, I mean actually "deep and emotionally moving" personal. Which brings me to Walk With Us: How "The West Wing" Changed Our Lives compiled by Claire Handscombe (see my interview with her here).

The first thing that struck me is that I'm not alone in the impact a television show has had on my life. My own personal struggles with life and how The West Wing was helpful are well documented but I truly thought that I was the only one who had used television to impact my life in a way that was so huge it could have meant life or death. It's not really the done thing is it? We are supposed to be entertained and challenged by television but our weaknesses are supposed to be ironed out by medical professionals, not the little picture box in the corner of the room. The recollections of fans that Claire has included in the book all show that modern media really does have an incredible reach. There are stories of people who met and are now married because of an interaction that revolved around episodes of The West Wing, Claire herself upped sticks and moved to Washington DC to better herself due to the pull of the show, and every person included in Walk With Us has a unique take to tell on how their lives changed because of something written by Aaron Sorkin.

The book itself is not huge. It isn't a taxing tome with 1000 pages of fans professing their love for the show, it's quite short and the memories contained within are written in such a way that it really packs a punch. The show, whilst predominantly based in the world of US politics, was primarily about relationships. The relationship between the President and his staff, his family and his country, the inter-office relationships between employees, the friendships that were born of people coming together to be part of something they believed in and felt was right. These are the kind of relationships we aspire to have in the real world and, to read the accounts of people who were touched by these elements of the show and then went on to have these types of relationships, was as touching as it was hope filling. If a small percentage of a show's fans can give themselves to change then we all can and it's that hope I took most from Walk With Us.

For die-hard fans there are, of course, particular episodes or interactions that sparked these memories for the various authors and remembering my own feelings during each of these episodes was a brilliant way to lighten my own soul but you also don't need to be a fan of the show to 'get' what's happening here. This is a very human book that's been compiled and contains within its pages as much emotion, turmoil, hope and change as was in the show's entire run.

Bravo to everyone included in a stunning read.

"Words, when spoken out loud for the sake of performance, are music. They have rhythm and pitch and timbre and volume. These are the properties of music, and music has the ability to find us and move us, and lift us up in ways that literal meanings can't. Do you see?"