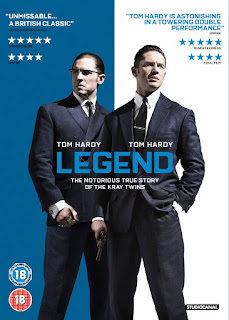 Susan Omand remembers a family connection as she watches Legend...

London in the 1960s. Everyone had a story about the Krays. You could walk into any pub to hear a lie or two about them.

There is a family story that, back in the early sixties, when my Dad was a travelling salesman for Sellotape, he picked up a hitch-hiker at Scotch Corner who needed a run into London. The man introduced himself as Frank Fraser and was apparently pleasant enough company on the journey, chatting about this and that, and it was only when they stopped for a cuppa at one of the service cafes on the edge of London, and the place fell silent with a palpable tension when they walked in, that Dad realised that this was THE Frank Fraser... "Mad Frankie" Fraser, London gangster and member of the Richardson gang, arch rivals of the Krays. Anyhow, they finished their tea and the journey continued the rest of the way into London and, when Dad dropped him off, Frank handed him a slip of paper through the car window saying, “Thanks for the lift, Pete. If you’re ever in trouble, phone this number and say I sent you.” It’s because of that story, I’ve always had a keen interest in films and books that document that era of London history, both real and fictionalised, and it was with this in mind that I settled to watch Legend.

The film, starring Tom Hardy in a tour de force performance as both the Krays, charts their business notoriety, its rise and subsequent fall, and personal struggles of the twins from the viewpoint of Frances Shea (Emily Browning), girlfriend and then wife of Reggie Kray. Written and directed by Brian Helgeland, Legend is adapted from the book by John Pearson, official biographer of the Krays, so I believe what happens in the film, with the usual embellishments of time and storytelling, to be true, including the murders of Jack Cornell and Jack “the hat” McVitie that were the twins’ eventual downfall, allowing oft-frustrated police detective Nipper Reid, brilliantly portrayed here by Christopher Eccleston, to finally catch up with them.

Visually, the film is stunning, capturing the look and feel of the era perfectly, from the glamour of the nightclubs to the seediness of the East End pubs. Does it glamorise the gangster lifestyle? Of course it does but the lifestyle for the one or two at the pinnacle of it WAS glamorous. With that amount of money, that level of power, that level of FEAR that they wielded when at their peak, it couldn’t be anything but glamorous but the film also shows what was needed to maintain it – the bloody violence and vicious intimidation, both between rival gangs and within the Kray’s own hierarchy, the blinding paranoia of always having to look over your shoulder and never being able to relax, the utter futility of trying to have a “normal” relationship within that abnormal lifestyle. It’s a steep price to pay.

However one thing raises this film above the majority of “gangster films” that I’ve seen and that is Tom Hardy. What a performance! He captures the sheer psychopathy of Ronnie Kray effortlessly, exuding danger and instilling fear because you just can’t tell when he’s just going to flip. However he also manages to capture enormous depth of character in Reggie, his love for Frances battling against his love for the job, addiction to success and loyalty to his brother. They are so different, yet so much the same and to portray both on screen is nothing short of a masterclass.

As Ronnie Kray says in the film, “Me and my brother, we're gonna rule London!” and yes, for a short and violent time, they did and they became Legends.