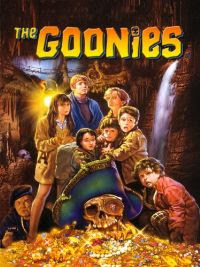 Our small band of Gunters here in the /G-f universe are reviewing every film mentioned in Ernest Cline's Ready Player One. This week Nate McKenzie does the Truffle Shuffle and remembers The Goonies...

The plot of The Goonies is probably one of the most ridiculous in all of the ridiculousness that was 1980s cinema.

Facing eviction from their homes and their town, a group of kids suddenly find a map in an attic that directs them to a fabled treasure. A treasure that is hidden somewhere in their own town! They set out on an adventure to find the treasure and save their homes. Of course, any treasure-seeking adventure requires proper villains, so the kids must contend with baddies trying to kill them and procure the treasure for themselves.

Chunk, along with Mikey, Mouth, Data, Brand, Andy, and Stef are The Goonies. Sean Astin (Mikey) and Corey Feldman (Mouth) are 80s icons, and Josh Brolin (Brand) hasn't stopped impressing in his roles since this film (his first). Sprinkle in recognisable faces Ke Huy Quan and Martha Plimpton, and the adorable punam of Kerri Green and you have an endearing group that easily whisks you away on a two hour adventure.

Chunk, Sloth, and One-Eyed Willie are the stars of the film even though one of the three is dead, one is disfigured, and one is the comic relief/butt of the jokes of the group of friends.

The ridiculousness of the plot is what makes this film so very 80s and so very beloved. Who of us didn't enjoy pretending to find treasure in their backyard as a kid? I remember pretending to find dinosaur bones and getting the privilege of naming a new species of "Terrible Lizard" anything I wanted. It would have been the Buckeyesaurus in case you were wondering or somehow doubted.

The idea of finding pirate treasure is, in my estimation, one of the most alluring fantasies though. That is a big part of the Pirates of the Caribbean's success (not that Depp hurt the cause or anything) The high seas, tropical locales, sword fights; it's all so romantic. Of course, that's presupposing that we disregard seasickness, scurvy, the possibility of being stranded on an island or drowning in the sea, or the fact that we would be absolutely shit with a rapier in our hands. None of that matters because treasure!

It especially doesn't matter if the treasure hunt takes place solely on land as it does in The Goonies. That is a much safer treasure hunt, even if you have the Fratelli's chasing you down.

The Truffle-Shuffle is as 80s as Miami Vice. It should be America's national dance - because it's iconic, not just because we're a nation of chubby blokes like Chunk. Shouting "Hey you guys!" in Sloth's voice is a call-to-arms for film nerds and pop-culture fans alike.

The Goonies will never cease to be a childhood favourite, no matter the decade you were a child. (Unless you fail to watch it until long after childhood because apparently it doesn't translate well according to my editor)

Goonies never say die and The Goonies legacy never will either.