Film - Neither Wolf Nor Dog 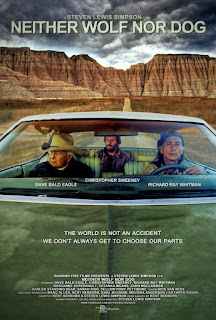 Neither Wolf Nor Dog has its World Première on the 24th June at the prestigious Edinburgh International Film Festival...

Adapted from the acclaimed novel Neither Wolf Nor Dog by Kent Nerburn the story follows a white author who gets sucked into the heart of contemporary Native American life in the sparse lands of the Dakota's by a 95 year old Lakota elder and his side-kick.

Funded by fans of the novel and shot with a crew of 2, over 18 short filming days and working alone in prep and post-production, Simpson pushes the envelope of what can be achieved in the modern era of indie film-making. Filmed on Pine Ridge Indian Reservation, the harshest part of the USA, the film shows the beauty, tragedy, humour and power of this unseen part of America. After Hollywood players failed in trying to produce it over 20 years, it became known as “the great unmade Native American novel”. Simpson succeeded, after a personal approach from the author.

Simpson said of the film's cast, "I have never been so fortunate in my life casting a film. Not just all wonderful for the roles, but amazing people who were so easy to work with in what could have been difficult conditions. They all had my back at every moment. We all knew we were making something bigger than us all."