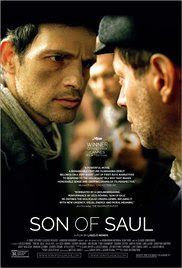 A powerful review of a powerful film as Tony Cross watched the Academy Award winning Son of Saul...

The further we get away from the actual events of the Holocaust, and the fewer survivors remain alive to tell their stories, the more we are going to rely on historians to make sure that what happened is never forgotten. However, most people won’t read the history books and it will be fiction that will be required to do much of the work in telling these stories.

The popularity of Stephen Spielberg’s ‘Schindler’s List’ is one way of telling those story but the truth of the Holocaust is that survival wasn’t what happened to most people swept up in it. Most of them ended up dead. Survival was a matter of luck. The Holocaust was, as well as an exercise in industrialised murder, an exercise in humiliation and in looting. The SS looted as a matter of policy. They looted property, they looted clothes and the looted people, which brings me to Son of Saul.

Directed by László Nemes this is the story of Saul Ausländer, a Hungarian Jew, working as part of the Sonderkommando at Auschwitz. The Sonderkommando were – usually – Jews who helped with the disposal of victims in concentration camp. They were regularly executed in their own turn in order to make sure that there were no witnesses to what is going on. It was, in its own cruel way, an opportunity to survive a little longer.

Saul has, when we first see him, been numbed – or perhaps numbed himself – to what was going on around him. Barely any emotion crosses his face when we first see him and then, as the first minutes of the film pass, you realise that László Nemes has made the directorial decision to almost never remove the camera from Saul. There are occasions where we see his viewpoint or get a shot away from him but for almost the entire time we are focused on and attached to Saul. The audience becomes Saul’s shadow.

It enables us to be part of everything Saul is part of and get pulled about by the regimented chaos that is his life in the camp. Things happen around him. Terrible things.

The first part of the film sees Jews herded into the gas chambers whilst voices tell them that everything will be alright and that there will be hot food afterwards. This vortex of bullying and lies swirls around Saul. Then the doors to the gas chamber close and we hear, but do not see, what happens next. It is horrifying. It is Saul’s job, in the aftermath, to take the clothes of the dead; to clean the blood from the floor of the gas chambers and remove the bodies to take them to the crematoria where they will be burned. But on this occasion a child has survived.

It is this child, whose survival only lasts long enough for a German medic to kill him off, that is the beginning of events that unravel Saul’s numbness. Saul thinks this child was his illegitimate son, although we never know if this is true or not. Whatever the reason Saul becomes fixated on finding a Rabbi and burying his son in the Earth.

Jewish law – as far as I understand it – frowns on cremation, which I’m sure caused great pleasure to the Nazi’s building and managing the crematoria. Saul wants his son buried properly, even if such a task seems impossible.

The film follows that quest in all its hopelessness and it seems that gradually through his need to do this ‘right’ thing Saul gradually wakes up. The quest gives us a guided tour of camp life. We get to see the arbitrary nature of death in the camp’s system. There’s also an excellent scene which shows how the Nazi’s humiliated the Jews when Saul is mocked and unable to respond when he comes face-to-face with German officers in the morgue.

Géza Röhrig plays Saul. It’s one of the most fantastic performances I’ve seen from any actor in any film. Its understated effectiveness makes for a stronger film, particularly as he is absolutely the centre of the film.

I don’t normally talk about cinematography – here by Mátyás Erdély - in my reviews, basically because I’m not an expert, but there’s something sickly about the colour in the film. Something slightly disconcerting. As if we’re inside someone else’s nightmare, which isn’t to say it is artificial. It just adds to the feeling of wrongness. It looks like (and this may just be me) Hieronymus Bosch has given up painting and taken up cinematography.

Also praise should be given to the sound design too. It is the sound of what is happening that is often the truly horrifying moments in this film. Our focus on Saul means that most of what we see is blurred or passes quickly. It is the sound: of screams, of blows, of gunshots, of crying children and weeping adults that envelopes us in the horror of Saul’s situation.

The Jews of Hungary were unlucky. They had escaped mass deportations until 1944 but then – in just eight weeks – 424,000 of them were deported to Auschwitz-Birkenau and tens of thousands were killed by Hungary’s home grown fascist movement, The Arrow Cross. By the end of the war about 565,000 Hungarian Jews would be dead. Survival would have been a miracle and perhaps the strongest part of this film is that it lets us see that and that the ending is as real as it could possibly be.

This is an exceptional film that should have had a far wider distribution than it did. Even if its subject matter wasn’t so worthwhile it would be worth watching purely for Géza Röhrig performance as Saul. It’s a hard watch, but well-worth the effort. See it.