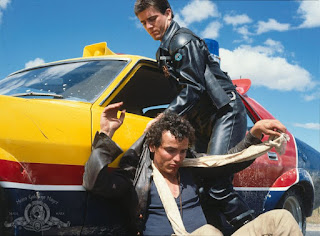 Our small band of Gunters here in the /G-f universe are reviewing every film mentioned in Ernest Cline's Ready Player One. This week Steve Taylor-Bryant takes on the first two Mad Max films...


Slightly different these time around as we've promised to review EVERY film mentioned in Ernie Cline's Ready Player One but when it comes to two particular titles it has to be in one article, purely because I believe them to be one great film split into two for running time reasons alone. I'm probably very wrong but you'll get what I mean come the end of this ramble through my thoughts... Hopefully.

I hadn't watched the Mel Gibson films for maybe 25 years and only revisited them because I didn't like Fury Road. Don't get me wrong, Fury Road is a very pretty film with plenty of action but I didn't get a story I could easily buy into and left the cinema disappointed so it made me question whether I'd ever liked the Mad Max films. It had been quarter of a century since I'd watched them, perhaps I wasn't remembering well, maybe I have rose tinted recollections, so it was only right I went back to the beginning to see whether I've ever loved them. Yes, yes I have... Partially. Beyond Thunderdome was a mess, it made Fury Road look like an epic, but parts 1 and 2 were just magnificent!

Due to a worldwide energy crisis there is disarray, especially in Australia, where motorcycle gangs have started to terrorise the population of this near-dystopia and a police force has been built to tackle the every growing violence. Max Rockatansky is personally affected by the rise of chaos as one gang leader, Nightrider, kills a cop leaving Max to seek justice/revenge and a chase that sees Nightrider's demise. The gang, the Acolytes, is now headed by Toecutter who will rape and pillage his way across the country leaving citizens too scared to testify. Max and his partner Goose continue on their voyage for justice but the Acolytes capture Goose and burn him alive, leaving him in a vegetative state and a distraught Max leaves the force to spend time with his family. The Acolytes return and kill Max's family leaving Max an angry man hell bent on revenge, cruising the roads in a souped up V-8 killing gang members in horrific ways.

A few years later and, with gasoline now a priceless commodity after nuclear war, Max is cruising the roads looking for fuel when he stumbles onto a group of survivors. The group are housed in a refinery and have fuel and just want a better life but a gang, run by Humungus, is killing anyone that gets in his way as he seeks to take all the fuel. Max is a burned out shell of his former self and has no interest in taking on another maniacal gang but after another attack on him he offers to help the group transport their fuel safely to the coast and their new lives, leading to the inevitable confrontation with Humungus. 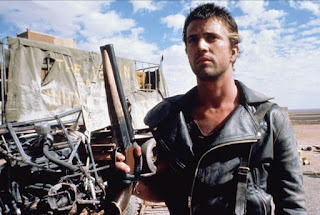 The two films go hand in hand. The Road Warrior, or Mad Max 2 over here, may be a sequel in the eyes of studios but to me is just a continuation of Rockatansky's story, the end of the journey started in Mad Max. It's not a new story, it doesn't do anything new, it just finished what the film started and I can't watch them separately. If I put on Mad Max then I'm going to watch The Road Warrior as well, it's just one long film. But what a film! No the story of a wronged man isn't a new concept, no the idea of vehicular warfare (can't think of a better term for what happens in the films if I'm honest) isn't new either and yes parts of the story feel 'borrowed' from other things but what George Miller and his cohorts did was add character to the violence, introduce a young unknown actor to the world, who plays revenge motives better than most and, due to lack of budgets and CGI technology, they used stunts like no other production ever before. It was real. You cringed when a guy got hit in the head with a motorbike because you knew it wasn't computer generated, THEY HIT A GUY IN THE HEAD WITH A MOTORCYCLE! It had a cheapness about it that wasn't cheesy, it suited the poorest nation of the story. The big bad guys had to be big and bad because these weren't Industrial Light and Magic creations, these were maniacs. It filled your mind's eye with unthinkable, realistic violence whilst telling a story.

These are the reasons that, after 25 years, I realised it wasn't a rose tinted love but a genuine affection, and it was the opposite of Fury Road which makes use of the new technology in filmmaking and larger budget, which uses established Hollywood stars and is weaker because of it. If it hadn't have been for Fury Road I might not have gone back to the older films and without Ernie Cline I might not have written about them so I'm thankful for that. I just wish Miller had made his new film in the style of the old. A big budget and the drawer of A list stars doesn't always make something better.