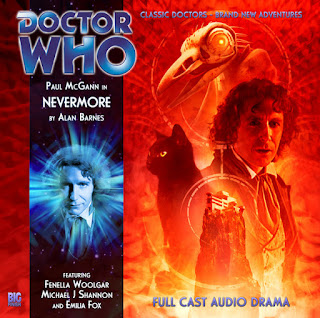 Our Doctor Who audio expert, Tony Cross, delves into the back catalogue available from the Big Finish website. Today is the Eighth Doctor and Tamsin adventure Nevermore...

Of course it could be about none of those things. It's could just be an ongoing adventure in the Doctor Who series. A simple tale of how the Doctor is dumped on Nevermore as the result of a bit of TARDIS sabotage undertaken by a Gallifreyan cat in order to tidy up a nasty problem created by a renegade Time Lord.

It just so happens that he ends up in a prison designed by a man - Senior Prosecutor Uglos - with a serious Edgar Allen Poe obsession. So the prison guards are giant robotic ravens. Quoth I. The prison is on a planet called Nevermore. A planet that used to be the hang out of the rich until Morella Wendigo decide to assassinate a general. With a biological weapon. A biological weapon so unpleasant that the Time Lords were called in to help tidy it up. That kind of unpleasant biological weapon.

Wendigo was found guilty and sentenced to life imprisonment in a building set on the planet she destroyed in order to help her contemplate the consequences of her actions, which she has been doing for twenty years. But someone is bumping off Wendigo's compadres and Uglos thinks she might be the next victim. So he's come, along with his assistant Berenice, to ask her some questions. Oddly Uglos is also terrified of cats. Whether they be Gallifreyan or not. Too much Poe.

Of course the Doctor and Tamsin stumble into all of this and Uglos leaps to utterly wrong conclusions. Then the proverbial really hits the fan. I won't spoil it but suffice it to say an ickle Gallfreyan tidpud* is the least of everyone's worries.

To begin with I wasn't quite into this. The new assistant, Tamsin (Niky Wardley), was being annoying and stupid - actually not stupid...let us say naive - which was distracting. Although there was some amusing stuff about Gallifreyan cats which kept me entertained and the over-arching mystery of the whole darn thing.

Then it gets really creepy. It's not just the cast quoting huge chunks of Poe in a suitable stentorian fashion, although that does help. It's not just the ravens or the red mist. It's the whole atmosphere, especially as the Doctor and Tamsin get tortured and terrified by Uglos, Berenice and Wendigo. The Doctor deals with it in his usual inimitable style but Tamsin is genuinely terrified (and I could see why). Listening to it on headphones whilst travelling back from work on London transport was rather disturbing.

The performances are great. Michael J Shannon plays Uglos. He's got a great voice for it, especially when quothing Poe left, right and centre. Fenella Woolgar is Wendigo. Woolgar plays Agatha Christie in The Unicorn and the Wasp but couldn't be more different here as an American accented war criminal. It's nice too that Wendigo isn't the obvious monster she could have been. There are layers to Wendigo that sometimes we don't get in Doctor Who characters. Berenice is played by Emilia Fox. I didn't spot her voice at all, which surprised me. And that's a hell of a piece of casting for a minor part.

Say what you like about Big Finish but the strength of their casts is a constant amazement to me. Well, not constant. That would make me some kind of idiot. But Emilia Fox is great in this. Again a character with layers.

Oh and let me not forget the magnificent McGann who is rather brilliant in this. I particularly like his unbothered response to Uglos's attempt to torture him into some kind of confession and his grumpy interactions with the cat.

So after all this waffle I should say I enjoyed this a lot. There's a Doctor Who meets The Pit and Pendulum - Karloff and Lugosi version. And then again it's probably something else altogether.

*Tidpud is a Cross family name for a cat. Blame my Dad.