Non-fiction Weekend - The Possibilities are Endless 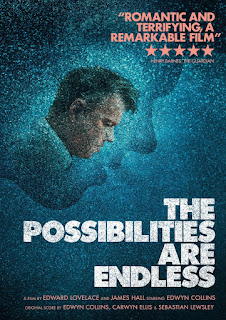 The Possibilities are Endless as Tony Cross watches the film about Edwyn Collins for our Non-fiction Weekend...

Here’s an off-beam suggestion for a film to watch this weekend, “The Possibilities are Endless.” It is a film about Edwyn Collins, a singer-songwriter, formerly of Orange Juice but probably best known for the song A Girl Like You.

It’s the story of re-building his life after a stroke that effectively deleted his mind. It’s also a love story. A real love story. It isn’t a fairy tale. It isn’t two pretty actors falling in love after a series of mildly comic misunderstandings. It isn’t all flowers and butterflies. This is the story of a marriage an relationship being built and re-built. Because this film isn’t just about Edwyn Collins, the musician. It is about Edwyn Collins and Grace Maxwell.

There’s a real intimacy between Grace and Edwyn built on their history and then on what’s happened since Edwyn’s stroke. It hasn’t been easy.

But this isn’t a sad story.

This is about fragility and strength. How that spongey thing that sits inside our skulls can let us down terribly. That what we are can be gone in an instant. That we are so much about who we remember we are. But equally it is about how resilient we are. How we can be broken but how we can put ourselves back together again and how we are not alone.

The directors, Edward Lovelace and James Hall, have made something that isn’t a pure documentary here. A lot of the initial part of the film is done by voiceover whilst we watch images and people underneath the talking. And Edwyn’s struggle to communicate and to be understood is illustrated through images too.

Then there’s a silent story of a love affair blossoming between two unnamed people played by William Collins (Edwyn’s son) and Yasmin Paige. This story I took to be partly an illustration of Edwyn and Grace’s story, perhaps simply because William Collins looks so much like his Dad. But partly something more universal. That need to be connected. That need to be loved.

Fundamentally though this is a story about resilience, recovery and love. Apparently when Collins first woke up from his stroke he could say only two phrases, ‘The Possibilities are endless’ and ‘Grace Maxwell’.

There in two phrases is what this film is about. It’s about the magnificence of what we are and what we can be, even in the midst of great trials and it is about love.

What more do you need?