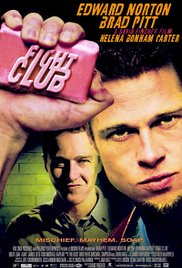 Our small band of Gunters here in the /G-f universe are reviewing every film mentioned in Ernest Cline's Ready Player One. This week Jayson Kristen doesn't talk about Fight Club...


I am Jack’s smirking review.

Listen up, maggots. You are not special. You are not a beautiful or unique snowflake. You're the same decaying organic matter as everything else. This is your life... and it’s ending one minute at a time. You may feel lost while reading this but then you realise that it’s only after we’ve lost everything that we’re free to do anything. Now, a question of etiquette - as a reviewer, do I give you the ass side of this movie or the crotch?

If any of these quotes resonated with you, pissed you off or tickled your philosophical g-spot then welcome to Fight Club, the first rule is we don’t talk about it.

Fight Club is David Fincher’s 100 million dollar cult fiction afterbirth based on the novel by Chuck Palahniuk. A fast paced psychological drama, Fight Club follows the twisted internal journey of a self loathing insomniac (Edward Norton) who battles his mind while inadvertently creating an anti-materialist cult devoted to emancipating the world from corporate greed.

Norton’s character, simply called “The Narrator,” finds a cure for his insomnia by pretending to be terminally ill while attending anonymous support groups. Finding solace by crying with people who are actually going to die, he is unnerved when he notices another impostor, Marla Singer (Helena Bonham Carter), attending the same groups. Unable to cope with the presence of someone else who knows the truth (i.e. The Standing Behind Me at the Urinal Effect) The Narrator’s sanity is destroyed. With no more remedy for his insomnia, we watch as The Narrator delves into a world of madness, destruction and gunshots at imaginary friends.

Blaming consumerism, Fight Club’s charm lies in it’s cynical roots. Since the time of Ancient Greece, philosophers have been asking the question: What do we realllllly neeed? Based on the theory that all one needs is self respect, The Narrator and Tyler Durden (Brad Pitt) create a plan to tear down the nation's financial system one symbol at a time.

Fight Club makes us ask some basic questions: What is it to be controlled? What is it to be free? How far can we be pushed before we push back? This battle between Materialism and Cynicism rages on and those who dismiss Fight Club also dismiss this long storied debate. Though many in Western society would claim that Materialism has long since won, it’s refreshing to see the concept challenged on a large scale.

Tyler tells us we must surrender our comforts to be happy. That the more money we spend the more miserable we will be. Of course, to Tyler, everything is about destruction. Which is...you know. One way of looking at it. But at the very least Fight Club will make you question what it means to be sane and what it means to be a consumer at the turn of the 20th century.

So if you’re tired of always losing the rat race and fantasise about watching the world burn then slip into your most basic minimalist black-t and press the play button. As the nihilism spills from flatscreen and cleanses your materialistic soul take a moment to smile and be happy. In fact, be as calm as Hindu cows because, in this fleeting moment, you are alive. Value that, because on a long enough timeline, the survival rate for everyone drops to zero.