Season 2 of Mr Robot is coming and the excitement is mounting here at /G-f HQ as the social media marketing ramps up...

The award-winning Mr Robot returns for a TWELVE episode run (rather than 10) to Amazon Prime in the UK next week (14th) with an initial double episode, and it looks set to be even darker than before. If you remember at the end of season 1 (if you don't remember, read Steve and Nate's slightly spoiler-y articles), after Fsociety’s attack on the global finance system, disgraced former E Corp chief Tyrell Wellick is in hot water and even President Obama condemned him on national television (at least according to the official trailer)

However last night things stepped up a little more with a mysterious email being sent out to "friends" with a message (below,) countdown clock and a cryptic "Join Us" button. 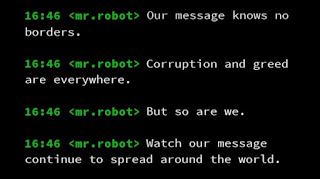 At the allotted hour (4pm EST, 9pm BST) a link took you to the official Mr Robot Facebook page where THIS message played out live (skip the 3 minute countdown at the start but keep watching til the end).

It was repeated an hour later in Spanish. And two hours later, the Canadians got this:

More live messages are promised for today. Mr Robot really is setting out to change the world. And the World is finally Awake.