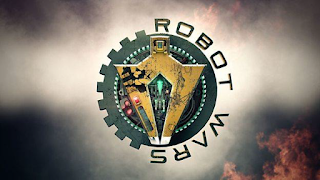 Everything you ever wanted to know (and probably some stuff you didn't) about the new Robot Wars but were afraid to ask...

Robot Wars, which, yes, involved robots fighting each other for our entertainment, was on and off our screens at regular intervals for six years between 1998 and 2004 until it disappeared from TV all together, only to be kept alive in the form of live events around the country. Originally presented by Jeremy Clarkson for the first series, Red Dwarf's Craig Charles took over for the rest of the run with various co-hosts and the battle commentaries were always provided by football commentator Jonathan Pearce.

Well, now it's coming back to BBC Two!

Dara O Briain and Angela Scanlon host the brand new series of Robot Wars with commentary again from the legendary Jonathan Pearce who returns from the original series with his inimitable take on the robot battles. Filmed in a huge (20 m square and 7 m high), purpose-built fighting arena in Glasgow, 40 teams of amateur robot fighting enthusiasts battle it out over six episodes to become Robot Wars Champion 2016.

The format hasn't changed much - each episode has eight competing robots. The action starts with two group battles, with four robots in each battle. The top two robots from each group battle then go through to head to head battles where all four robots fight each other once. The top two then compete in the episode final – the winner going through to the Grand Final.

In each round of the competition, the robots will fight in a timed battle. The winner will be decided by either a ‘knockout’ (flipping your opponent, dumping your opponent in the "pit" in the arena or immobilising your opponent for 10 seconds) or if there is no clear winner once the time runs out, a panel of three expert judges will agree on a ‘judge’s decision’. 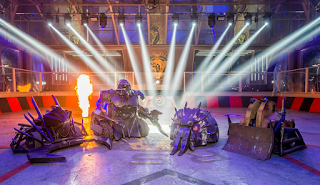 The three Robot Wars judges are:

Professor Noel Sharkey - Professor of Artificial Intelligence and Robotics at Sheffield University, Prof Sharkey is the only judge to appear in every series of Robot Wars. Prof Sharkey is also a co-director of the Foundation for Responsible Robotics.

Professor Sethu Vijayakumar - A world-renowned roboticist and Director at the Edinburgh Centre for Robotics in the School of Informatics at University of Edinburgh.

The judges base their criteria on aggression, damage and control – so everyone has to attack from the start.

The Arena itself contains the dangerous hazards of Fire, Spikes, The Flipper and The Iconic Pit and, as well as battling it out against each other, the robot teams must avoid the infamous and intimidating House Robots. Aiming to terminate anything that strays into their Corner Patrol Zone , Sir Killalot, Matilda, Shunt and Dead Metal show no mercy as they menacingly patrol the arena ready to destroy. They are ‘descendants’ of the original show and have been evolved and upgraded to modern-day standards - bigger, stronger and more brutal than ever before! 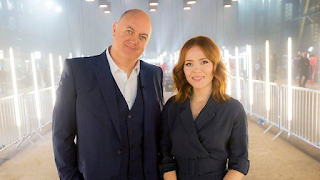 1. Why do you think people love Robot Wars so much?

Dara: “I think people love the show simply because everything just smashes into everything else and it is sparks and explosions and metal being torn up. It's carnage, who doesn't enjoy that?”

Angela: “And it gets pretty manic, they don’t hold back, even when they might have extra battle rounds to go through, they go all in the first round with everything they’ve got.”

D: “True, they give their all in the first round and are often still being repaired by the time they need to fight again in round two. Also the human story of Robot Wars is really popular too, a team of three people working together in a shed; fans who have put months of time, effort and passion into it, but then their appearance on the show lasts 40 seconds because they drove their robot into a pit.”

A: “Especially when they’ve re-mortgaged their house to build the robot of their dreams and then BOOM, it’s all over, just like that.”

D: “The atmosphere is brilliant, the crowd are chanting the names of the House Robots, shouting and cheering and wearing foam fingers and screaming for Sir Killalot!”

A: “The crowd are cheering for the House Robots more than anyone else, they really get behind them, and it’s so great!”

D: “I haven’t chosen one because I feel you shouldn't get too close to them; that way, when they die it’s not as much of an emotional wrench.”

A: “I’m going to stick with the girl and go for Matilda or ‘Tilly’ as I like to call her. She’s got a neon pink tail and great big eyes.”

4. Were you a fan of the original Robot Wars?

D: “Yes but I wouldn’t know the lore of it, all the history of the robots who came before, and real fans do. I liked it, don't get me wrong, and I watched some of the old episodes recently and enjoyed them again but I would stop short of calling myself a "fan" mainly because the bar is set pretty high on what being a fan of Robot Wars means. Frankly, judging by the teams who are competing this time around, if you didn’t actually build a robot after you saw the show, then you can’t call yourself a true fan.”

A: “Since the announcement that Robot Wars was returning, people are genuinely excited for it coming back, fans aren’t like ‘oh it’s just another reboot’ but ‘oh my god we’ve been waiting for this for 15 years and literally cannot wait!’ So yes, and hopefully we don’t mess it up, there is a really big love for the show.”

D: “One major thing about the new Robot Wars is that if you put any of the old House Robots in the pit with the ones that feature now, they would last about eight seconds because things have moved on. The House Robots grip harder than they used to, they smash further, they move quicker, they are terrifyingly bigger and heavier than the first time round. But then, aren't we all?”

A: “It’s also a very family affair this time round, there is a little girl aged seven who has built a robot with her dad and there are other father and son teams too. There is even a team consisting of mum, dad, son and the son’s fiancé, now that shows a real commitment!”