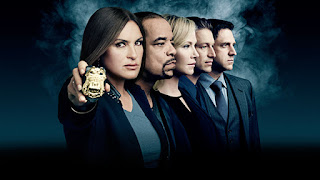 In a series of articles, Susan Omand and Steve Taylor-Bryant are going to remember the policemen, spies and criminal specialists that entertained them over the years. Today, Susan Omand looks back over the long running Law & Order spin-off Special Victims Unit...


In the criminal justice system, sexually-based offences are considered especially heinous. In New York City, the dedicated detectives who investigate these vicious felonies are members of an elite squad known as the Special Victims Unit. These are their stories.

It was Christmas time in New York City. It was late, snow was falling and I was flipping through the channels of the TV in my hotel room to stop me actually flipping out about why there were ordinary electrical sockets in the shower in the bathroom when an episode of a police procedural I hadn’t seen before caught my eye. This was Law and Order Special Victims Unit.

Yes, that was how I discovered a show that I’ve been watching now for about 15 of the 17 seasons there’s been so far [Now 20 of the 22 seasons as of February 2021 - Ed], due to the fact that I only managed to catch it at the start of season 3 on British TV on my return from holiday in NYC. Part of the Law and Order franchise, created by Dick Wolf that has spawned several spin offs in its long standing career, Special Victims’ Unit (SVU) stories all revolve around hard hitting cases involving a “special” victim, often vulnerable adults or children. Wow, cheery stuff, you may be thinking and you’re right, it isn’t an easy watch sometimes but that’s partly what I like about it, the darkness in the stories and in the characters, on both sides of the law, and the fact that you can’t guarantee a happy ever after ending.

It is currently the longest running scripted non-animated U.S. primetime TV series and the longest running member of the cast is Mariska Hargitay, daughter of film star Jayne Mansfield, who has played the tough and smart, but not as detached as she thinks she is, Detective Olivia Benson since the first episode. Other cast members have come and gone in that time, including one of my favourite conspiracy nuts Det John Munch (Richard Belzer) who came over from the original Law and Order series along with Captain Cragen (Dann Florek). The character of John Munch, by the way, holds the record for being in the largest number of different series, having also appeared in Homicide: Life on the Street, The X-Files, The Beat, Trial by Jury, Arrested Development, The Wire... and Sesame Street. SVU is also the show that I think turned Ice-T from a rapper who appeared in films and TV into a proper actor, giving him his first serious starring role when, originally contracted for only 4 episodes, he liked the series so much he asked to stay and has been a permanent member of the detective squad since Season 2.

I mentioned before that you can’t guarantee a happy ever after ending but that’s not because the detectives don’t often “get their man”. A really enjoyable part of the show for me is watching the court proceedings after the investigations are completed and the suspect is in custody. It’s satisfyingly frustrating, if you see what I mean, to watch claim and counter-claim as cases are made and fall apart in court at the hands of the ADA’s and defence attorneys. That feeling of utter futility having worked up a case that’s watertight, when you’re sure that the suspect is guilty, only for it to mess up on a technicality and the perpetrator to walk free – GAAAH! I love it.

This is one franchise spin-off that hasn’t yet become same old, same old, because, even though the 18th series has been commissioned, the producers still find ways to keep it fresh, not least by introducing a new semi-regular cross over with the Chicago franchise - Chicago PD, Chicago Med and Chicago Fire, (all of whom cross over with each other regularly anyway) and also created by Dick Wolf. And yes, because of those cross-overs, I’ve started watching Chicago PD as well now but I’ll leave my crush on Voight for another time.