Audio - Doctor Who: Light at the End 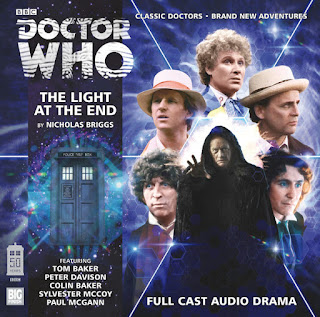 Our Doctor Who audio expert, Tony Cross, delves into the back catalogue available from the Big Finish website. Today is the Fiftieth Anniversary special, Light at the End...

I'll make an initial admission. I've been looking forward to this more than I have The Moff's TV 50th. Why? Because much as I enjoy New Doctor Who, I'm a Classic Who boy* and I'm a fan of Big Finish's work in general so I was convinced it would be good.

In fact I'd say if you were thinking of testing the Big Finish waters this would be the perfect story to begin with. You get all the first Eight Doctors**. Yes, all of them. No, I'm not going to tell you how you can work it out for yourself. Like I did. That's part of the fun.

You also get a lot of familiar companions to join the fun. In fact the only oddity would be the presence of Charlotte Pollard with the Eighth Doctor as she is - so far - a non-television companion but that just provides you with an excuse to go back and listen to Storm Warning and begin the Eight Doctor's adventures with Big Finish.

That's not to say this is uninfluenced by New Doctor Who. I'd suggest that the story might have had a far different ending if the New series hadn't already led the way with...ah...spoilers.

I think the reason this works so well is that there is only one villain. There's no attempt to crowbar in the usual suspects and over-stuff the villainous pudding. We mainly deal with one main villain here and it is The Master, played with oleaginous malevolence by Geoffrey Beevers. (That's not a spoiler btw. He's in the trailer and on the cover of the CD for heaven's sake.) And it allows the Doctor's to shine. It's a lesson in how to do a multi-Doctor story without losing the stories shape.

And this really is all about the Doctors.

Each gets some time to do his thing. Each gets some juicy lines, although Colin Baker gets the best big speech and Peter Davison gets the spookiest and darkest moments.

In fact at points towards the end of Part One when the Fifth Doctor and Nyssa are investigating an 'incident' it is genuinely creepy as hell. There's a dawning realisation about what is to come - or at least I had one - and that just adds to the darkness. It's incredibly powerful and possibly the highlight of the whole thing for me.

It's a fine celebration made by people that obviously care. The Moff will have to work bloody hard to make me feel as happy after I've watched The Day of the Doctor and I hope he does.

*42 year old boy but when it comes to Doctor Who still that fascinated, geeky and mildly terrified 7 or 8 year old boy