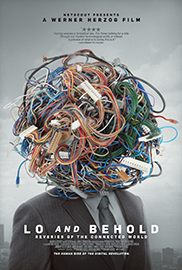 Watch a new featurette from Werner Herzog's fascinating documentary about the evolution of the Internet, Lo and Behold: Reveries of the Connected World...

The Oscar®-nominated documentarian Werner Herzog (Grizzly Man, Cave of Forgotten Dreams) chronicles the virtual world from its origins to its outermost reaches, exploring the digital landscape with the same curiosity and imagination he previously trained on earthly destinations as disparate as the Amazon, the Sahara, the South Pole and the Australian outback. Herzog leads viewers on a journey through a series of provocative conversations that reveal the ways in which the online world has transformed how virtually everything in the real world works - from business to education, space travel to healthcare, and the very heart of how we conduct our personal relationships.

Working with NETSCOUT, a world leader in-real time service assurance and cybersecurity, which came aboard as a producer and led him into a new world, Herzog conducted original interviews with cyberspace pioneers and prophets such as PayPal and Tesla co-founder Elon Musk, Internet protocol inventor Bob Kahn, and famed hacker Kevin Mitnick.

In the words of executive producer Jim McNiel, “It’s a journey even Werner, with his immense imagination and inquisitive mind, didn’t expect. Unless you have lived in the technology space, you don’t yet fully appreciate what dwells there.” Herzog adds: “It is one of the biggest revolutions we as humans are experiencing.”