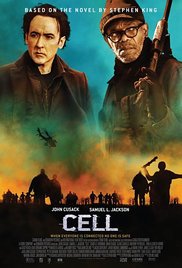 Ren Zelen has scared up some Frightfest films to watch, so did she find Cell frightening or simply frightful...

Directed by Tod Williams (Paranormal Activity 2) and apparently co-scripted by King himself, Cell brings yet another adaptation of a King best seller to the big screen, reuniting John Cusack and Samuel L. Jackson after their first foray into Stephen King territory in Room 1408.

John Cusack plays comic book artist Clay Riddell, whose cell-phone runs out of juice while he is calling his son on arrival at a nondescript airport terminal. Searching vainly for somewhere to recharge, he finds all the outlet points already taken by people charging their phones, and those who are not charging cell-phones have their ears pressed to one and are making calls.

His frustration turns to bemusement and terror as he finds he is one of the very few survivors of an inexplicable event known as ‘The Pulse’ which sends a mysterious signal through the global network turning all those using a cell phone (and that seems to be most everybody) into mindless, rabid, foaming killers.

At first, the zombies, (called ‘phoners’ in the book), attack everyone, including each other, in a frenzy of bloodlust. Riddell, another of King’s surrogate everymen, narrowly avoids the madness, still in possession of his senses thanks only to the chance event that had his phone die at the moment that every other operational cellular device was infiltrated by the rage-inducing signal.

Escaping the murderous mob at the airport, he ends up allied with a cool-headed stranger (Samuel L. Jackson) who happened to be underground and had no phone signal, and a frazzled teenager (Isabelle Fuhrman) hiding out after her mother goes mad in the initial outbreak.

Riddell is determined to find his son and estranged wife in Vermont, and leads this makeshift family on an episodic road trip, crossing New England on foot and encountering various survivors such as schoolboy Jordan (Owen Teague) and his headmaster (Stacy Keach) along the way.

Though this film begins with a technology-gone-awry premise, the pale, slavering, slack-jawed roaming hordes give Cell the distinct feel of a zombie movie. Considering the ongoing popularity of shows like The Walking Dead, that might seem to guarantee something of an enthusiastic audience.

King has touched on the Zombie genre in some of his books before Cell: in ‘Home Delivery’ (in ‘Nightmares & Dreamscapes’) he wrote a kind of zombie love story and the Slow Mutants in ‘The Dark Tower’ series are that world’s particular version of the undead.

Cell displays a kind of B-movie sensibility that harks back to the classic Zombie movies of Stephen King’s pal, George A. Romero. Sprinting with the speed of the 28 Days Later or World War Z zombies, the ‘Phoners’ develop a hive-mind and begin to move in swarms. They soon evolve new methods of recruitment to grow their numbers, communicating throughout their ‘network’ by emitting an atonal blare of modem noise. They appear to be controlled by a deformed and dishevelled entity called ‘The Raggedy Man’ (Joshua Mikel) who, it transpires, was present as an imaginary villain in one of Riddell’s graphic novels (but this thread is never adequately explained or developed).

Even while faced with this threat, the humans still cannot find unity and continue to commit atrocities against each other. Despite the gore and violence, there is always the slight indication that perhaps it is time for the species as we know it to become extinct, and that the humans are the true monsters.

The effects in general, from the digital explosions to a climactic horde of the infected, betray limited resources. The film doesn’t quite succeed in effectively conveying the breakdown of society, which appears to happen all at once and is immediately accepted and understood by the survivors.

Williams tends to capture the small-scale skirmishes, outdoor gunfights and gory scenes—people thrown from balconies; a man munching on his dog—in erratic, shaky-cam close-up, often with not enough extras to convey the panic and chaos. The most impressive spectacle is a burning plane punctuating the airport carnage by crashing into the terminal.

Cell works best when it shifts its dramatic focus to the desperate and disparate group of people fleeing from shelter to shelter hoping to find some kind of safe haven. However, there is a minimum of spectacle, much filming in outdoor locations and rather a lot of time spent hiding in darkened buildings where, although the characters talk a fair amount, they seem to say disappointingly little.

The conventionality of the characters is partly saved by the cosily familiar presence of Cusack and Jackson, and workmanlike turns from the youngsters Fuhrman and Teague. This adaptation of Cell is diverting enough if you are a fan of variations on the zombie genre, but it will probably join the already overstuffed ranks of rather mediocre screen versions of Stephen King’s ever popular stories.