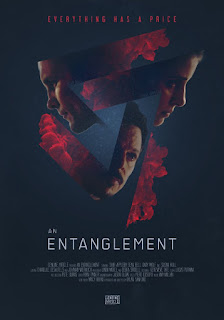 Susan Omand is back in her favourite shorts (short films that is) and watches Dylan Sanford’s An Entanglement...

I’ve said before how I enjoy the artistry of short films, how they are often abstract performance pieces meant to evoke emotion rather than tell a story. Well, An Entanglement is different. It definitely has a story and oh wow does it tell it.

I don’t want to give away any spoilers, as the film is only 15 minutes long and you can watch it for yourself below, but the general gist is that a woman is approached in a diner by a man who tells her that her husband has paid him to murder her. He then offers her “the chance of a lifetime.”

As the story arc develops, it is pure Tales of the Unexpected and reminded me so much of the short dramas that played out in that series. The concept is simple but absolutely inspired, building over the course of the 15 minutes and it really suits the short film format as, to pad that single idea out any more would cause it to become convoluted and over-complicated. As it is, it is a vignette on ‘a Day in the Life’ of the assassin because, for me, he is the central character here, not the married couple.

The acting from Sean Bell as the assassin is outstanding! He gives what could be a very clichéd character an air of no-nonsense practicality, of just trying to make a buck and get the job done which, when coupled with the dark and subtle humour in Yancy Berns’ dialogue, makes the assassin superbly engaging and a character that I would love to see developed for a TV series.

However, all three of the characters are incredibly well developed in such a short time. I immediately got the feeling that the couple pretty much deserved the relationship they had. The woman, Violet, played by Shiri Appleby, came across well as vindictive rather than desperate, which is a fine line to tread, and the man, Rick, played by Gary Wolf, manages to be thoroughly dislikeable without doing anything wrong at all; other than taking a hit out on his wife that is. The chemistry between them is tangible, even though they are never on screen together, and they provide the perfect supporting cast.

The other thing I must mention is the “look” of the film. It’s easy to see that the director Dylan Sanford comes from a background in Art and Camera departments as his use of colour and framing of shots adds an old-school feel to the film. In fact the whole production of the film, complete with an atmospheric score by Lucas Putnam, oozes a classic quality that you wouldn’t expect from a fairly low budget short.

It’s very fitting that the song, performed by Amy Milan, over the enchanting credit sequence at the end is sung in French because this film had a definite continental feel about it, reminiscent of one of my favourite films, Man Bites Dog. Whether it’s the incredible concept, the wonderfully pragmatic characters, the carpet or the beautiful, beautiful cinematography that gives it that Gallic edge I don’t know but whatever it is, it works. If you haven’t watched any short films before, this is a fine place to start.