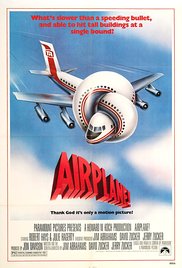 Our small band of Gunters here in the /G-f universe are reviewing every film mentioned in Ernest Cline's Ready Player One. This week, surely Steve Taylor-Bryant can take on Airplane!..

Looks like I picked the wrong week to quit sniffing glue.

I love a farce. Slapstick comedy so good it pleases a simpleton like me, comes across as effortless and yet took a lot of work and genius to accomplish. There is some great slapstick in modern film and television and pretty much anything that works well involves one, or a combination of, messrs David Zucker, Jim Abrahams, and Jerry Zucker. ZAZ are responsible for some of the best farcical simple comedies of the last 30 odd years. Police Squad and its film spin offs The Naked Gun series, Ruthless People, Top Secret! and Hot Shots. BASEketball is a great comedy, some of the Scary Movie films have some ZAZ touches of genius, but the best is way back in history, alright 1980, and Airplane!

Airplane! was born of more serious films. In the 1970's Hollywood had a fascination with disaster movies. The Poseidon Adventure, Earthquake, The Towering Inferno were amongst the more well known but it was Airport and its sequels that spawned the spoof to end all spoofs. To truly take the piss out of something deadly serious you need to add an edge to the comedy, that edge must come in your casting. Too often comedy films don't work because the cast are comedians and the expectations of the audience are higher because of it. You can have a really funny script but if you cast Will Ferrell's band of friends then it'll only ever be a Will Ferrell film. The genius of Airplane! was that it went ridiculous with its humour but used relatively straight guy performers to play it out.

Some of the funniest scenes in Airplane! involve the most serious of people. Kareem Abdul-Jabbar was a famous basketball player with the Los Angeles Lakers at the time but his rant to Joey whilst pretending to be Murdoch was hilarious. Robert Hayes plays the hero of the piece, Ted Striker, but was a relative unknown before Airplane! Lloyd Bridges and Peter Graves were more famous for the likes of gritty cop show Joe Forrester and Mission Impossible respectively than anything even remotely funny, and the film's best performance by Leslie Nielson? Nielson was an ultra serious dude with a back catalogue of cop shows, horror flicks and even a disaster movie in City on Fire. Considering nowadays Nielson's name is synonymous with spoof films, before Airplane! he had no interest in comedy.

This was the secret to Airplane! and its success. It really came across as a serious film with incredible humour due to a cast that didn't represent comedy. If you didn't know it was a spoof and just saw the cast listing you would enter a cinema expecting a disaster film. Very rarely does everything you need to work come together in such a glorious way as it did with Airplane! The spoof genre is, rightly in my opinion, much derided nowadays with sloppy, recycled gags (Angie Tribeca I'm looking at you), comedians turning up for a pay-cheque (Wilson brothers I'm looking at you), and too many filmmakers thinking they have the magic touch that ZAZ had (Seth Rogen I'm looking at you) changing the glorious landscape of funny more towards a cesspit of mediocrity.

Airplane! still stands up today as the hilarious gag fest it is because of two things... It really is funny and because no one in film today has the ability to better it.

And don't call me Shirley.