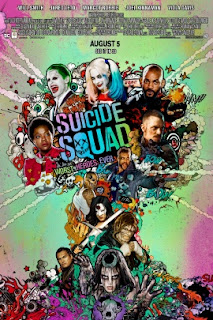 "You know what they say about the crazy ones..." so, instead, David Ames watched Suicide Squad...


The DC universe has been a dark, scary, and disjointed place since the February release of WB’s highly panned Batman v. Superman: Dawn of Justice but since the Comic Con footage of Suicide Squad was leaked in July 2015, there was a glimmer of joyous, chaotic hope. That hope was even more lifted as the first, dark and strangely whimsical trailer was released. The film had a strange but pleasing feel to it. Then came the release of one of the best trailers I have ever seen and I knew, from that moment, that the movie was for me.

That hope didn't necessarily die last night but it did take a beating. Let me start first by saying that I really did enjoy the movie. I want that to be out front. I thought the look was great and the actors were all pretty perfect for their roles. If you got a chance to check out my fantasy casting, you should already know how I feel about Harley and Deadshot. In fact, the actors are a great place to truly begin the review:

Margot Robbie was pretty amazing as Harley Quinn, although they definitely sluttied (is that a word?) her up a little too much for my taste. That being said, from a man's perspective... wow.... Robbie is gorgeous. Will Smith was also great, although my fears were realised in that he was so charismatic that, at least for me, he didn't feel like Deadshot. I just liked him too much. He was still great and his gunplay was spot on.

Jai Courtney was hilarious as Captain Boomerang. I never thought I could actually like that character but damn, Courtney made it work. From the little bit we see of Katana, Karen Fukuhara was good and wielded that sword like a true warrior. Jay Hernandez brought a great mix of both intensity and emotion in his portrayal of El Diablo, as did Joel Kinnaman as Col. Rick Flag. Rounding out the squad itself is Adawale Akinnuoye-Agbaje as Killer Croc whose portrayal was brutal and bloodthirsty, as it should be, but the writing of his character left me at a loss. Why were they trying to make him so ghetto? Still a great portrayal, just a little puzzling at times (BET, really?). Cara Delevingne was a great addition to the cast and, before the end of the film, was actually amazing as Enchantress. In the end, the voice dub was at best sub-par and although she was still OK, the voice pulled me out.

When this film was introduced, the elephant in the room was always who would be forced to follow up Heath Ledger's career and character defining role as the Joker. While the press shots scared the hell out of me, I had faith that Jared Leto could pull it off and he does so with room to spare. This is not like any Joker you've seen which is a good thing. He's older, more gangster oriented, and in many cases, much more brutal than previous incarnations. He doesn't feel like he is constantly laughing or fighting for chaos. He just genuinely seems like a sociopath and I loved his performance far more than I could have imagined I would. 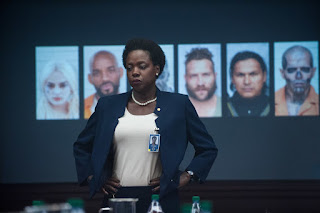 Now as a comic fan, I have to say that Viola Davis' performance stole the film for me. What she does with Amanda Waller is nothing short of incredible. She may be one of the best adaptations of a character, up there alongside Ryan Reynolds' Deadpool, in terms of really capturing the role. With all of the faults in the movie, she was a constant bright spot.

Now onto the movie itself. It is still brand new so I will try to steer clear of any spoilers but I will say that we were sold a lie from the trailers in that the film really doesn't focus on Harley near as much as Deadshot. I get that she is ridiculously gorgeous and a fan favourite in the universe but to utilise her so much in the trailers and then shift A LOT of the focus to Deadshot feels like sleight-of-hand.

The film begins with a magical fifteen or so minutes in which we are given a look at the background/origin of the Suicide Squad members. This was probably my favourite part of the whole movie. It was fun, fast, and very, VERY stylised but, instead of detracting like it did later in the film, it really worked for the beginning. The jokes are very funny when they work and not at all when they are forced so it's about a 80/20 split for the positive in that respect.

The issues for this film really lie in the pacing. I can only speculate as to what happened during the extensive reshoots that took place after response to Batman v. Superman but it seems as though they cut a literal fuck-ton of footage to keep the movie from being both longer and darker than originally intended. The film still works but not near as well because instead of getting full character development, we are saddled with a disjointed story and obvious missing footage which would add both explanation and intensity to later scenes and dialogue. Also, it appears as though they just cut scene to which the film seems to refer later so you feel somewhat lost at least half the time.

A small side note: I don't get how shooting something multiple times won't kill or really even damage it but a single hit with a bat and it is done...that threw me for a loop.

In the end, what the film truly suffers from is pacing and editing. It seems as though what they cut was dark and emotional but unlike BvS, it would have worked here. WB needs to keep their hands out of their movies and just let the directors and writers do their thing. David Ayer is usually amazing and it seems as though someone wanted to play a little too much with his baby and ended up dropping it on its head.

I want to close with an amazing quote about SS from a friend of mine by the name of Josh Young: "The Suicide Squad movie is like life: There are pacing issues and some of it is dull or illogical, but just like life it is occasionally wonderful. If you're a comic fan, there's a lot to like; if you're not comic fan, though your ways are strange to me, you may find some enjoyment as well."

I couldn't say it any better myself. Go see the movie and enjoy it for what it is, but don't hope against hope that it will be as good as that second trailer because you will be sorely disappointed.