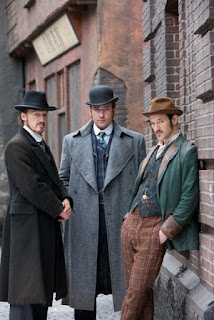 Ripper Street is coming back to the BBC with Series 4 moving to BBC Two...

Currently only available on Amazon Prime as an Amazon Original Series, BBC Two have released a trailer for Series 4 but they're not hinting yet at when exactly the series starts, although it must be soon, and only give the synopsis line "There can be no peace for men with blood on their hands. When Reid's old friend Isaac is accused of murder, he is drawn back to Whitechapel to investigate."

However BBC America is a little more expansive with the series synopsis and catches us up with the news that "The new season sees Edmund Reid (Matthew Macfadyen), Detective Inspector Bennet Drake (Jerome Flynn) and surgeon Captain Homer Jackson (Adam Rothenberg) reunited to restore the peace of the blood-stained streets in London’s East End. Picking up in in the summer of 1897 with Queen Victoria celebrating her diamond jubilee, Reid, who has retired from his detective work, finds himself drawn back to Whitechapel after discovering that an old friend is set to hang for a brutal murder he’s convinced he hasn’t committed. Meanwhile, DI Drake has now risen to the Head of H Division, holding a position of trust and status in Whitechapel. Moreover, he’s now married to the love of his life, Rose Erskine (Charlene McKenna). Also returning this season is MyAnna Buring  as Jackson’s wife Long Susan Hart – now only weeks away from being executed for her part in the locomotive disaster that killed 55 people. Time is running out fast for Long Susan – will her husband find a way to help her escape the death sentence before it’s too late?"

Unless you've watched it already on Amazon Prime and are waiting for Series five to start there, which is promised for next year but rumoured to be the last, I guess you'll have to wait and see if it is too late or not. In the meantime, watch the BBC trailer for Series 4 below.