Films - Top Five Films for Talk Like a Pirate Day 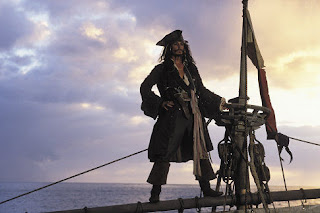 Ahoy landlubbers. It be International Talk like a Pirate Day and that Scottish scourge of the high seas, Susan Omand picks her top five (not Arrrr rated) Pirate-ish films that arrrren’t Pirates of the Caribbean...

Don’t get me wrong – I love the first Pirates of the Caribbean film, Curse of the Black Pearl. When it came out it was funny and original, it had a great cast, a brilliant baddie in Geoffrey Rush’s Barbossa and whoever turned Johnny Depp into an overly camp version of Ronnie Wood in a rowing boat needed a medal – at the time. But then they did a sequel. And another. And another. And... you get my (tidal) drift. What was once funny and original is now tawdry and tiresome, it’s less yo ho ho and more yo ho hum. So that’s why I wanted to concentrate on some of the other great piratical films out there.

Pirate films have been around since the start of the golden age of the silver screen and they’re one of the few film genres I think that always have you rooting for “the bad guy”. I mean, if you check back the history books, pirates in real life were really not very nice people at all and, even in literature, they still come across as the villains of the piece. However Hollywood has managed to romanticise the theft, pillage and murder of innocents, glossing over the fear factor and underplaying the dangerous nature of these murderous men and women. Oh yes, pirating was very much an equal opportunities employer with just as many women as men gaining infamy in the newspaper headlines of the time. Now though, pirates in film are portrayed as either anti-heroes, sticking it to “the man” as they battle against government boats, or almost comedic characters, harmless in their high seas high jinks and a good friend to all, handing out their ill-gotten gains to those more deserving before sailing off into the sunset.

Anyway, before I get to my top five, which covers more than 80 years of buckled swashes, a mention to a few that didn’t quite make the list. First, the stunning (for the time) The Seventh Voyage of Sinbad, outstanding for being the first film to use the groundbreaking special effects of Ray Harryhausen. Another “not quite a pirate” film that deserves a mention even though it didn’t make the top five is Master and Commander, for pure epicness, thanks to booking the giant water tank film set at Baja California before PotC could get to it, and the pairing of Russell Crowe with Paul Bettany. Thirdly there was Roman Polanski’s Pirates in 1987, notable for the facts that it should have starred Jack Nicholson and Timothy Dalton but didn’t and that Polanski took ten years to make it, while avoiding arrest in several countries in the process in a truly piratey way.

One final thing before we get to my top five – some of you may complain that The Goonies is missing from my list. You’re right, it is missing. And we all know why... 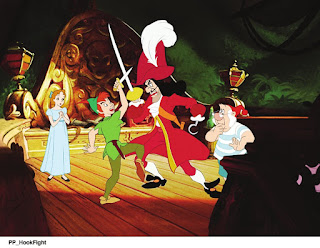 An adaptation of J. M. Barrie's story about a boy who never grew up. Typical Disney stripping the darkness out of the story but this Captain Hook is still one of the most suave pirates out there.

Mr. Smee: [referring to Neverland] This ain't no place for a respectable pirate. 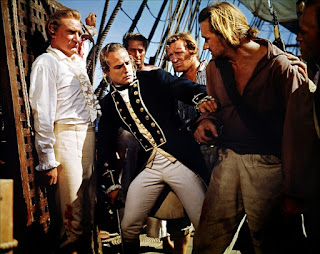 4. Mutiny on the Bounty

OK, maybe not quite pirate-y but still seaworthy. Nothing to do with coconut bars or kitchen towels, more to do with Marlon Brando, Trevor Howard and Richard Harris.

Captain Bligh: I'm not leaving you Mr Christian, not ever. Go to the dirtiest little corner of the world I'll be there, right behind you, with a rope in my hand. 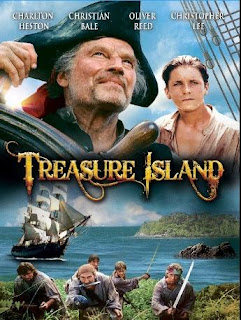 There have been many many versions of the Robert Louis Stevenson classic over the years but the cast list of the 1990 film puts it head and shoulders above the rest. I mean where else would you get Charlton Heston, Oliver Reed, Christopher Lee and Christian Bale in the same film?

Long John Silver: What a splendid thing it is to be young and have ten toes. 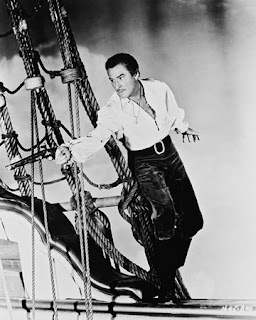 One of the greatest swasher of buckles of all time, Errol Flynn.

Crewman: [Captain Blood's ship has just received a terrible broadside from the one remaining French warship] We're sinking! What should we do?

Dr. Peter Blood: Do? We'll board a ship that's not sinking! 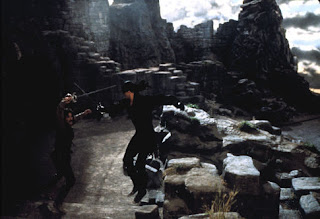 What's that? It's not really a pirate film because the Dread Pirate Roberts is not a real pirate? Inconceivable!  But it's my list and I'm counting it, so there.

Inigo Montoya: Is very strange. I have been in the revenge business so long, now that it's over, I don't know what to do with the rest of my life.

Westley: Have you ever considered piracy? You'd make a wonderful Dread Pirate Roberts.