Book - The Secrets of Tenet 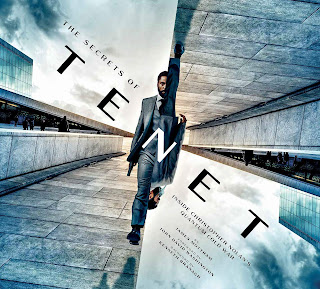 The Secrets of Tenet is a behind the scenes “deep dive” into the production process of a Christopher Nolan film. Inside it you’ll find a step by step guide in not only the film making process but how Nolan’s process differentiates from most film makers of today. The book covers Nolan’s process in “chapters”, from the script, to casting, to locations, props and costumes, to the many shooting days and postproduction process. I must admit if you were wondering how a film is made, this book pretty much covers everything.

Beginning with a foreword by John David Washington, in which he (the son of Denzel Washington) conveys his passion for Nolan and his storytelling through the dark knight trilogy, whilst also summarising his experience working with Nolan on Tenet. The actor describes the movie as a “catapult movie” that hints at where Nolan is going whilst also reminding us of what Nolan has been doing, which then leads us into the first chapter.

Over the course of the 150 or so pages of this book you’ll explore the production process through pictures of the sets during filming, giving us a visual of how Nolan interacts with all segments of his production crew, and also the scope of the sets that a name like Nolan gets the permission to build. Also included are images or records of storyboards for particular scenes, giving us an idea of what Nolan’s vision of the scene was in the earliest stage of production.

The book also consists of many quotes from production crew members, giving comments on filming or whatever segment of the production they were involved in, with significant quotes being mentioned in big bold writing as a kind of “summary” for every couple of pages. This helps the book read almost like a documentary as more often than not, the many quotes from the actors, crew members and Nolan himself, will support all of the points mentioned in each chapter and perhaps lead into the next topic.

As soon as we learn all the hard work that goes into the early pre-production stages, we jump straight into filming the first sequence in Warner bros studios, which consists of a fight within an airport storage vault. Nolan mentions his technique of filming the sets that he builds first is the best way to get the crew or actors familiar with the style of filming (especially a production such as this) so that if there are any issues, the set can be rebuilt and reshot (which may not be the case for shooting on location in Mumbai). Nolan mentions his desire to “hit the ground running” by jumping straight into a fighting sequence in which Robert Pattinson’s character Neil and J.D Washington’s character (named only the protagonist) are fighting “inverted soldiers” who are supposedly moving back in time. We delve deep into the how when it comes to backwards bullets and set building for this one, before moving into the first on location shoot.

The first on location shoot was in Estonia, and involved shooting the opening sequence of the film, in which J.D Washington infiltrates an opera house building, the scene involved hiring over three thousand extras who some would pose as performers and some as the audience, and the struggle that came with sorting out makeup/costumes for all these extras was clearly a huge undertaking. We, from there, move on to an interrogation sequence in a train yard, to then an office for the scientist who later explains what Tenet is to the protagonist (J.D Washington). Through this we learn how the backwards bullet effect is created as well as the effect of objects moving into your hand, (almost as if you dropped them, but this act is reversed). They would then move on to filming a debriefing scene, between the protagonist and Neil (Robert Pattinson), a scene in the antagonists second freeport, by making use of a warehouse filming location, and then the anticipated freeway “chase scene” much later in the film. In this segment Nolan goes behind the scenes on how he gets an “inverted” car to work, in which it could move backward in several gears by making the car think its going backwards, whilst also cutting corners when they couldn’t acquire certain vehicles.

In chapter 6 we move onto the ocean shoots in which we learn all about acquiring the antagonists main vessel, covering the issues that their were with getting one and the insurance that comes with it, we also learn of the great lengths Nolan goes to, to ensure that he films on location as often as he can, as there were times during this shoot where his crew suggested building the set in a studio. It’s also made clear that as a filmmaker when your looking to film on location, finding the one that fits your vision can be a challenge.

Chapter 7 of the book covers the shoot in Mumbai, where we learn not only the issues that new locations can often cause that can’t be planned for, but also the safety risks that the actors are willing to go against to give the best performance for this production. It’s obvious that the cast and crew had a lot of faith in Nolan for this project, though I suppose only by watching the film ourselves (perhaps several times) that we can be sure that it paid off.

I think The Secrets of Tenet is for anyone curious about the film making process or anyone with a particular passion in Nolan’s work, as this book certainly explains not just the making of this film, but how Nolan and his team thinks. Even if you wish to just look at the images in the book, the number of images and storyboards included in the book is astounding, which really helps the reader visualise the production and I enjoyed flicking through the pages of this behind the scenes art piece.

From a film making perspective though I also think this book is worth picking up. I, as a student studying film, found this to be inspiring to read and I think anyone who’s seen the film would appreciate this book as a gift. However, if you would prefer to enter the film more spoiler free, I would have to recommend watching the film first as they do discuss a great many scenes of the film.