CLASSIC DOCTOR WHO ON BRITBOX – Arc of Infinity 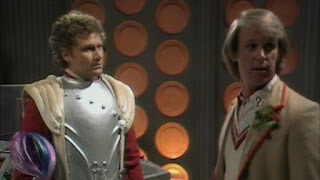 On 26th December 2019, 627 pieces of Classic Doctor Who content were made available to Britbox subscribers. Every Sunday in 2020, our Doctor Who expert, Tony Cross, looks back at some of the classic stories. Here is the Fifth Doctor adventure Arc of Infinity ...

Find Tony's full Classic Doctor Who on Britbox list of reviews here.
Welcome to Season Twenty. We kick off with Arc of Infinity or the jogger's guide to Amsterdam.

Our villain is Omega played by Ian Collier, rather than Stephen Thorne. Whilst Thorne was expected to do much more shouty than Collier I think Thorne's vocal performance was much stronger. This version of Omega is over-designed and a little fussy. And to be honest whilst they are clearly trying to make Omega less black and white villain I think you end up feeling less sorry for him in this story. His fate is a tragic one and it has driven him insane and messianic but in this, he just feels like a bog-standard psycho of the week.

And talking of disappointments what the hell happened to Gallifrey? It's turned into a slightly out of date nightclub, complete with tasteful cream sofas scattered about ts corridors. It takes ten million years of absolute power to develop such great interior design skills. It's pretty unimpressive, particular when the costumes look so different. It's as if two totally different civilisations are at work. One does the interior design, one makes the clothes and never the twain shall meet.

The filming in Amsterdam is also mildly disappointing. It suffers from the Paris problem of The City of Death. No one can film inside anything so most of the sequences are exteriors and what you effectively create is a dash around the sites outside filming. So as Tom and Lalla spend huge chunks of time dashing across the roads of Paris so Peter, Janet, and Sarah do a lot of running around Amsterdam. There is no additional atmosphere to be gained from being in Amsterdam, even if the script makes a feeble attempt to justify the location through some gobbledygook about being below sea level and the use the hydrogen in water as a power source but you might as well have filmed it in Birmingham, which also has a lot of canals, for all the Amsterdamness that the location filming brings. I mean playing 'Tulips from Amsterdam' does not a feeling of Dutchness create.

Then there's the Ergon: "one of Omega's less effective creations". There's an almost good costume struggling to get out of what looks a bit like a walking chicken carcass. Again it suffers from the classic Doctor Who monster problem of waddle, which just makes it so obvious that we're looking at a man in a costume.

Finally, add a discussion about some energy link thing called 'The Arc of Infinity' which makes very little sense and this story starts to look a little poor. However that's not totally fair. It does move along at a fair old lick with a strong first episode laying down all the relevant plot points.

Sarah Sutton gets to be the Fifth Doctor's only companion for a short while and she - and Nyssa - thrive as a result. The Fifth Doctor and Nyssa work really well together. If they'd stayed like that I think we'd talk about one of the great Doctor-Companion match-ups but Tegan returns from her short exile in this via a series of incredible coincidences too silly to outline her. Tegan looks very different on her return with a short hair cut and a new costume. Now I have to admit to having fond memories of Tegan in that costume but it is totally impractical in reality and whilst it isn't quite as unsubtle as some of Nicola Bryant's costumes were to be it does have 'one for the Dads' sewn into it.

There's some good support from some of the guest stars, particularly Michael Gough's Hedin (another friend of the Doctor's whose gone bad); Paul Jerricho's cold-hearted, jobsworth Castellan and Colin Baker as Commander Maxil. Colin Baker does a good job of Maxil making him unlikeable but understandable. It's obviously taken on slightly more importance as Colin is to become the Sixth Doctor but ignoring the history I reckon Colin would make a damn fine villain (like Tom Baker) if given the chance.

In the end, this isn't a great story. There is a great Omega story to be told somewhere, but this isn't it. File it under 'Could Do Better'.
Tony Cross is the creator of the wonderful Centurion Blog's found HERE and HERE.