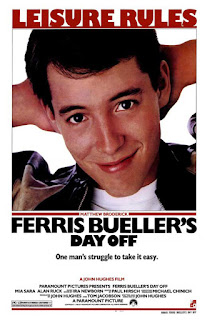 Our small band of Gunters here in The DreamCage universe are reviewing every film mentioned in Ernest Cline's Ready Player One. This week Nate McKenzie takes the day off with Ferris Bueller...

"Trying to stop watching Ferris Bueller is like trying to stop running as you're being chased by a bobcat... after huffing an 8-ball while mainlining an oil drum full of RedBull." - Nate McKenzie

Rife with fantasy and adventure, cinema in the 1980s was a bastion for imagination. Time-travelling and outer space exploits, the magic of sword and sorcery (LadyHawke, Willow), even people being caught up in video games come to life (Tron, The Last Starfighter) allowed the progeny of the 80s to escape the tedium of everyday life. That is, of course, the exact purpose of film and the 80s did it better, and in a more broad fashion, than most other decades.

For this reason, John Hughes defies logic as probably the most recognizable and beloved piece of the 80s catalogue even though he never delved into any of those aforementioned realms of filmmaking. But that is also the reason he is so treasured..

The list of heralded Hughes films are iconic: The Breakfast Club, Sixteen Candles, Weird Science, Pretty In Pink, the Vacation films. Basically the anti-Spielberg, Hughes was an Everyman in the arena of storytelling opting to capture the essence of real life scenarios that teens faced, steering clear of fantasy but still providing plenty of fantasticality. Which is why, above all, Ferris Bueller's Day Off is his best film.

Now, many would argue in favour of The Breakfast Club and I would not put up much of a fight in that battle. The Breakfast Clubs is one of the finest representations of dialogue driven emotional availability, wit and humour in the history of film. We all know, or were, one of the characters represented in that Saturday morning detention.

The difference with Day Off is that, as teenagers, we were not Ferris Bueller but we all wanted to be (or be with) him. Ferris is the epitome of intangibility, the person we emulate during shower-time inner-monologues wherein we win every debate with our stout intelligence and woo every crush with our charisma as we coolly glide through the world. That is where fantasy and fantastical are differentiated; one is escapism, an alternate dimension, whereas the other is an perfect-case-scenario extension of our real lives. 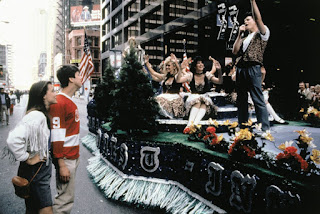 Ferris is showered in adoration (save Rooney and Jeanie) by everyone around him.

"The sportos, the motorheads, geeks, sluts, bloods, wastoids, dweebies, dickheads - they all adore him. They think he's a righteous dude."

He basks in his celebrity without taking it too seriously while managing not to be pandering to those that worship him. He appreciates that others envy him because he's well aware that his life is fabulous. It is that level of introspection that Hughes cultivates with Ferris' multiple fourth-wall breaks and dialogue that is heavy on existentialism - even though Ferris is staunchly against any 'ism'. Amidst Ferris' hijinks, Hughes continuously reminds the audience that at the core of the magnetic field that is Ferris Bueller, there is a young person, a high school kid, who, despite knowing much of who he is and what he has, also knows what he is not and what he lacks. Most important of which is an automobile.

Throughout the archive of Hughes' movies, there is one reemerging theme that stands out to me as most poignant: the events surrounding Hughes' teenaged characters always seem realistic and manageable, even though the characters themselves, predictably, overreact. The simple and mundane of their worlds are contorted into life-altering moments. This is so important because that is exactly what teenage life is like! It's dramatic, emotionally convulsive, and yet in retrospect, completely over-dramatised. We have all felt the pressure from parents and faculty to succeed. We have all been shredded to pieces by high school heartbreak. We have all wanted to dance in front of a crowd of peers and strangers and be the star of the parade. We have all wanted more of the good and less of the bad. For that reason, we regard the Hughes Filmography with such reverence. Hughes gingerly tucked us into bed at night, bellies full with the knowledge that someone, at least one person, understood the struggles of what it is like to be a teenager.

Ferris Bueller was the personification of what we yearned to be; his Day Off was the unlikely scenario that we hungered to experience.

But it is Cameron that, upon coming to terms with his dire situation regarding his father's Ferrari, dishes out the best advice of any of John Hughes works: