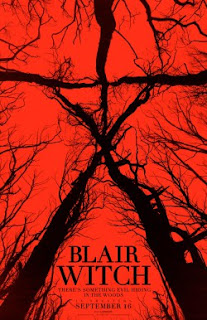 Ren Zelen goes down to the woods at night to see Blair Witch. Will she be shocked or surprised? Find out here...

In 1999, the original Blair Witch Project first hit our screens. It seems like a long while ago - the Internet was in its infancy and mobile phones were a still a luxury item. At that point in time it appeared that the horror genre had nothing new to offer in terms of original scares. In 1996, Wes Craven’s Scream had mocked the genre’s stale conventions and spawned a spattering of meta-textual, postmodern imitations with their tongues planted firmly in their cheeks.

Then came Daniel Myrick and Eduardo Sánchez’s Blair Witch Project. A movie made on a tiny budget which relied heavily on its viewers’ vivid imaginations and willingness to engage with the characters and events portrayed. It created its own publicity and cleverly generated public interest by its canny and innovative use of internet teases.

The website blairwitch.com was set up to create a buzz about the whereabouts of the missing students by featuring faked newsreel footage and police reports of the incident. It professed that the film was a documentary and that the mythology surrounding the woods in Burkittsville was real. Through ground-breaking viral marketing, swathes of the public believed the characters were real people and this 'found footage' was genuine.

In making their film, the directors used the intimacy engendered by the handheld cameras in an attempt to engage its viewers in an immersive experience as it took its hapless crew on a mysterious journey into the vast Maryland woods. Emotional authenticity was partly achieved by Myrick and Sánchez only giving the actors a broad framework of the narrative and failing to warn them of the impending scares that they had planned for the night ahead. Its trademark became the filming of anguished facial expressions in extreme close-up.

The movie’s financial rewards were huge, with the film grossing $10,931 for every $1 spent (according to the Guinness Book of World Records).

A sequel changed the concept to focus on the Blair Witch hype more than the legend itself. Now, 16 years later, we have the third film, Blair Witch. Lionsgate’s early marketing had the film under the title of The Woods so that the first audiences could discover for themselves that it was actually a Blair Witch movie.

The Blair Witch story concerns James (James Allen McCune) the little brother of Heather Donahue’s character from the first film. The discovery of new tapes in the Burkittsville forest leads him back to the woods to find answers to his sister’s disappearance 20 years ago.

Technology has evolved since the first movie in 1999, so the technology at the disposal of these new characters is far more sophisticated and they have common sense enough to make practical preparations. They have GPS, they have a drone camera, they are sceptical about the creepy legends and are not keen to wander off looking for foolish stragglers in the dead of the night.

Originally we followed three film students trying to make a documentary. Here, we have one film student - Lisa (Callie Hernandez) who is au fait with all the newest gadgets needed for filming the search as a project for her documentary class, although she she tells herself that she is helping friend James find closure regarding the disappearance of his big sister. They rope in long-time pals Peter (Brandon Scott) and Ashley (Corbin Reid) for help and support.

However, in 2016 it’s not just film students who are equipped to film events – the group meet up with a pair of Blair Witch vloggers (Wes Robinson and Valorie Curry), who promise to take them to where they found the new tapes, but secretly have a different agenda.

Using the vloggers’ old-school camera, plus Lisa’s camera and everyone’s’ head cameras, director Adam Wingard is able to craft a more detailed environment in the Burkittsville woods. When pixelated glitches occur between scenes, it seems more like a throwback to found-footage artefacts than an actual glitch, but it provides a simple method to allow scene transitions.

For these characters to feel peril, the film has to strip away all their new-fangled gadgets and safety nets in order to leave the characters as exposed and vulnerable as the original trio, and then subject them to the menace and risk inherent in the Blair Witch legend.

However, I now have to come clean - I admired the original Blair Witch Project for its innovations and the ingenious way it exploited its location, characters, equipment and budget, but, not for one moment did the movie actually scare me. I must raise my hand and admit - I didn’t find the original movie scary and I didn’t find this new Blair Witch scary either - I know the original frightened the bejesus out of some folks and I would assume this Blair Witch film will frighten folks all over again, for the same reasons.

For me personally, Blair Witch offered loud bashing around in the trees at night (again), stick-thingy mobiles dangling from trees in the daylight (again), a hell of a lot of running around the woods in the dark screaming (again), stumbling around a Disney-ghost-ride dilapidated house and whimpering (again), close-up shots of weeping, snot-encrusted faces looking scared (again) and in addition here we also have a bunch of random, undeveloped and unexplained unpleasant events, and a muddy tunnel. Personally, I find all the running, screaming, gulping gasps, jump scares and terrified glances a bit tedious, because I know nothing much else is actually going to happen.

The highlight for me was the briefest of glimpses of possibly the Witch herself (looking a bit like those tall, lanky aliens in Close Encounters) but blink and you’ll miss it.

None of this is to say that there won’t be folks who find Blair Witch very disturbing, scary and emotional; it’s just that I didn’t, as I didn’t the first time around. I like the woods, although I tend not to hang around in the dark for no good reason, but mainly because I’d like to avoid falling into a large crevasse full of realistically creepy earwigs.