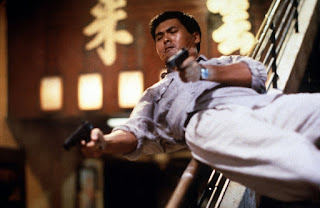 Our small band of Gunters here in the /G-f universe are reviewing every film mentioned in Ernest Cline's Ready Player One. This week Steve Taylor-Bryant goes in all guns blazing with Hard Boiled...

I'll be honest from the outset and let you all know... I'm not a fan of Asian cinema. I don't enjoy Kung Fu movies, the only John Woo movie I've ever been entertained by is Mission Impossible 2 (and no, Face/Off is also not liked by me, get over it) and I really don't get what you all get when it comes to film stars from the East. So what film do I get tasked with for this weeks Project RPO? A John Woo film, made in Hong Kong. Yes dear readers after the tears stopped I sat (was forced) in my chair (strapped to a table) to watch Hard Boiled.

Do you know what? I bloody loved it!

This wasn't what I'd been led to believe Hong Kong cinema was, this was an orgy of gunfire and violence that arouses every part of my action fan being. This was overindulgence, this was "throw away the plot and just kill something." This was the epitome of what a cops versus bad guys film should be and I now completely understand why Hollywood snapped up Woo shortly after Hard Boiled was made. This was, though, everything Hollywood gets wrong. It wasn't trying to be clever or have some long winded point like a Hollywood film. It also wasn't heavy on dialogue so didn't slow for even a moment like a Hollywood film. It didn't have some overpaid muscle man or pretty boy as the mainstay of the movie like a Hollywood film. In fact I don't understand why Hollywood snapped up John Woo at all as, going through the Woo Hollywood back catalogue, he hasn't made a film this epic since. What are Hollywood playing at?

Anyway I digress... Where was I?

The plot is a thin and very overplayed story but, in the hands of John Woo as director and the wonderful Chow Yun-Fat, it really doesn't matter. This is about action, unrelenting action. Oh and bullets, millions of bullets. And SO MUCH violence. The bloodshed is by the gallon and whilst it doesn't look, or spray up a wall as it leaves a bad guy, in anyway realistic you can't help but wince. The choreography that must have gone into the sequences must have taken years to get right. So much happens all at the same time but Woo never misses a beat and, to be honest again, come the end I was knackered. Absolutely worn out, exhausted even. Chow Yun-Fat is not an actor I know terribly well but that will change after viewing this. He seems to exude cool at every turn, a Hong Kong Kurt Russell if you'll allow the comparison (I know some of you get offended really easily) but not comedy Kurt Russell, original Kurt Russell, Escaping from a major city Kurt Russell.

This is the film that Hollywood wanted Woo for apparently. About time they let him make another film like it don't you think?