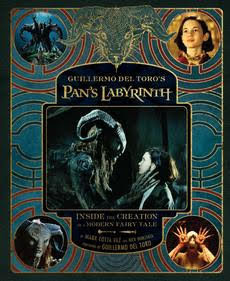 Titan Books announce the publication on 21st of Guillermo Del Toro's Pan's Labyrinth: Inside the Creation of a Modern Fairy Tale By Mark Cotta Vaz with Nick Nunziata...

In celebration of the 10th anniversary of the release of the beloved film, Guillermo Del Toro's Pan's Labyrinth offers a definitive account of the making of Pan’s Labyrinth, showcasing the Academy Award-winning masterpiece in unparalleled detail. Featuring original concept art, rare unit photography from the set, and even del Toro’s initial musings from his famed journals, this lavishly designed book provides readers with a behind-the-scenes look at every aspect of the fantasy film, from its terrifying creatures to its sumptuous sets and dark themes.

The book also includes exclusive removable items that any fan would love to own—such as a storyboard booklet and pages from del Toro’s notebooks—that provide new insight into the cinematic creation. Written in close collaboration with the mastermind himself, Guillermo Del Toro's Pan's Labyrinth is the ultimate compendium to the breathtaking film that has entranced viewers for the past decade.

Set in the aftermath of the Spanish Civil War, Pan’s Labyrinth weaves together the harsh realities of Franco’s Spain with a fantastical world inhabited by strange creatures. As the film unfolds, an imaginative young girl with a cruel, militant stepfather may be the mythical princess destined to inherit an underground kingdom. Hailed as a dark, thrilling masterpiece, the film catapulted del Toro to international fame, and garnered the writer/director a loyal fan base attracted to his technical skill and wild imagination.

Mark Cotta Vaz and Nick Nunziata set out to create a book that celebrates both the film and its creator on its 10-year anniversary, offering an unmatched look at the making of the deeply engaging and sometimes terrifying world of Pan’s Labryrinth. Throughout the book, Guillermo del Toro shares his insights into the art of filmmaking and on Pan’s Labyrinth itself, from its genesis through pre-production, creature design, shooting and post-production, and reflects on the film’s incredible, enduring legacy. The authors also interviewed every key player in the film’s creation: stars Ivana Baquero, Sergi López, Maribel Verdu and Doug Jones, producers Alfonso Cuarón and Bertha Navarro, and director of photography Guillermo Navarro, ensuring that no aspect of the film is left uncovered in this massively entertaining tribute.

Full of exclusive, never-before seen material on one of modern cinema’s most beloved classics, Guillermo Del Toro's Pan's Labyrinth is a must-own celebration of a legendary filmmaker.

Mark Cotta Vaz is the author of over 30 books, including the Twilight Saga companion books, all number one New York Times best sellers; the award-winning The Invisible Art: The Legends of Movie Matte Paintings (co-authored with Oscar®-winning filmmaker and Academy Governor Craig Barron); and the critically acclaimed biography Living Dangerously: The Adventures of Merian C. Cooper, Creator of King Kong. Vaz is a lifelong resident of the San Francisco Bay Area.

Nick Nunziata became one of the pioneering voices of the Internet in the mid-1990s as the creator of the film website CHUD.com. He later contributed to dozens of print publications and became the on-air film critic for CNN Headline News. He is now a composer, producer, and writer in the film industry with credits including Grizzly Park and Guillermo Del Toro's Don't Be Afraid of the Dark. He is also co-writer of the novel Grim Reaper: End of Days with bestselling author Steve Alten. He lives in the Atlanta area with his family and is currently working on a feature with filmmaker Joseph Kahn.

Born in Guadalajara, Mexico, Guillermo del Toro made his feature directorial debut in 1995 with the film Cronos, and has since gone on to direct Mimic, The Devil’s Backbone, Blade II, Hellboy, Hellboy II: The Golden Army, Pan’s Labyrinth, which garnered enormous critical praise worldwide and won three Academy Awards, Pacific Rim, and Crimson Peak. He is currently working on his next film, The Shape of Water. He lives in Los Angeles.