Book - Will the Real James Bond, Please Stand Up. 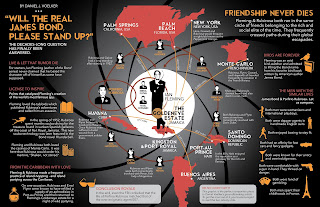 It's a year on from the release of SPECTRE and new evidence has come to light that Ian Fleming's James Bond was actually based on Porfirio Rubirosa according to research by Forensic Historian Daniel J. Voelker...


Through a series of connections that include Noel Coward, Errol Flynn, Doris Duke, Rita Hayworth and a host of Caribbean locations, litigator and forensic historian Daniel J. Voelker has made a compelling case establishing mid-19th century playboy Porfirio Rubirosa as the primary model for Ian Fleming's James Bond. Voelker is known for his groundbreaking findings that rewrote the history of the 1919 Chicago Black Sox scandal. The research has been gathered into an article: "Will the Real James Bond, Please Stand Up."

Although Rubirosa's name has been floated for years as a potential role model for Bond, Voelker traced the intersections of multiple early to mid-20th century personalities to add factual validation to the case. The reason Fleming may have never publicly admitted this is because he feared a racial backlash that would have hurt sales of his books.

"Fleming was restrained from identifying Rubirosa as his inspiration given Rubirosa's Creole, or mixed racial background; Fleming's audience in the 1950s and early '60s may not, unfortunately, have been very accepting of such a revelation," says Voelker.

While Fleming's use of his own pre- and postwar experiences have been well documented as plot points for his books, the question of his protagonist's character inspirations always lingered. Numerous researchers have cobbled together lists citing many characters who seemingly share common aspects with Bond, and from whom Fleming may have drawn direction. However, many of these same qualities can be found in virtually any popular action character, from Jason Bourne to Indiana Jones, or period heroes like Allan Quatermain orJohnny Fedora, whose "license to kill" exploits predated Fleming's Bond.

What has been missing in most investigations is a character that could have fallen within Fleming's circle and embodies the lion's share of Bond's qualities. Voelker argues that only Rubirosa checks all the boxes.

Voelker closely examined the similarities between Rubirosa and Bond, as well as Fleming and Rubirosa's lives, interests and circle of friends, lovers and admirers over a 30-year period. Multiple points of intersection include exotic ports of travel, interests, personalities, residences, and, most importantly, the intersection of specific influential friends.

"Two of the main focal points can be found through internationally famous celebrities Errol Flynn and Noel Coward. Friends with both Fleming and Rubirosa, these two lived between Fleming and Rubirosa in theCaribbean, traveled and partied with both of them and even shared a 'love connection' through certain well known women, including Rita Hayworth and Eva Peron," says Voelker. "While the clues point to Rubirosa, this debate will probably continue as long as Fleming's books remain in circulation and his character powers the most successful movie franchise in history," he adds.

The complete case for Rubirosa can be found in Voelker's article here. And click on the image below to get a higher resolution copy to read more easily. 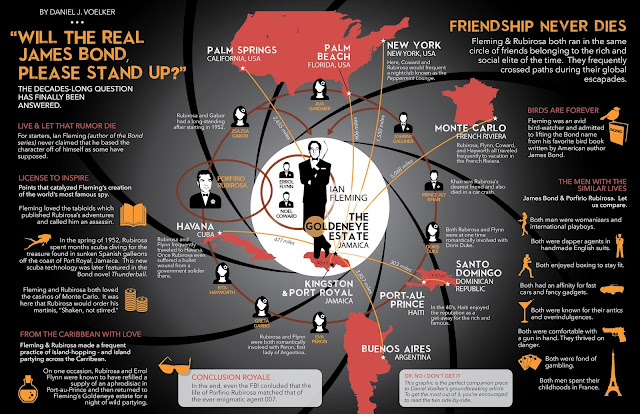