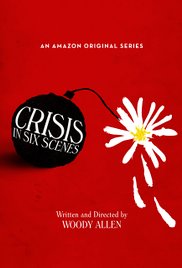 In setting out to watch a new Woody Allen TV series, does it take more than one episode for Susan Omand to have a Crisis in Six Scenes...

"Stick with what works for other people. Let ‘em say ‘cliché’, what do you care? You’ll be humiliated all the way to the bank."

See, here’s the thing. I don’t actually LIKE anything that Woody Allen has ever done in film before. It all seems a bit... well... pretentious and too self-indulgent for its own good. I know, I know, renowned film-maker, critical acclaim, artistically intellectual humour, blah blah blah – yeahhhh... nope, just didn’t get it. “So, why,” I hear you ask, “Are you even trying to watch the new Woody Allen series on Amazon Prime, Crisis in Six Scenes?” Interesting question and, thank you, I’m glad you asked. There’s one simple reason: The trailer made me laugh. Yup, that’s it. I got a laugh within the 2 and a half minutes of the trailer and the concept and characters seemed cool, so I “forgot” about who was involved with the series and watched episode one on its own merit.

Well, it wasn’t awful, which, for a Woody Allen thing and me, is high praise. Being the first episode there was a lot of character building and scene setting, with very little in the way of actual story and we haven’t even seen the other main character yet, hippy chick Lennie (played by Ms Achy Breaky Wrecking Ball herself, Miley Cyrus). However, the characters that were built and the scene that was set did not put me off. One thing I realised is that Woody Allen has finally grown into the curmudgeonly characters he plays in everything. The dithery, complaining, set in his ways but pretending to be with it, character that he has always played since, well, since ever, finally makes sense now that he is 80 and, as author Sidney (SJ) Munsinger, the character came off as knowingly amusing rather than irritatingly stupid. He was ably supported in episode one by Elaine May, who played his wife Kay, ironically, a marriage counsellor who, it seems, puts up with her husband by way of distracting herself with prattling book groups and bottles of wine but, ultimately, loves him. Their on-screen chemistry sits well and I’m pleased to see her getting more notice for her acting ability as she is more well known as a screen-writer, penning the screen-plays for likes of The Birdcage, Heaven Can Wait and Primary Colors, and her sense of character and timing comes through well. There was some smiling, rather than laugh out loud, humour, with some of the best interplay in the episode coming very close to the start with Sidney’s visit to his wise-cracking barber, played by Max Casella, when they discuss his writing. Good use was made of the 1960’s setting too, beautifully placed in the era by starting the episode with an almost documentary-style news montage of various clips from the Summer of Love, Vietnam, the Black Panther revolt etc. This was carried on in the dialogue, with, in addition to the necessary “weird hippy” references needed to build “the prejudicial case against” Lennie before we meet her, much mileage being gained from the Vietnam conversations, protestation and enlistment.

I think Woody Allen in short form (no pun intended) works a lot better for me because the self-deprecation never gets overdone, like it does in his features. No point is laboured or finessed too much and it doesn’t get a chance to be too over-indulgent; you don’t get the feeling that the actors are actually waiting for you to laugh before they move on to the next smugly-crafted joke, the pacing keeps it going. Will it manage to stay the course for the whole series? As marriage counsellor Kay says to her clients, “We can build on guacamole...”