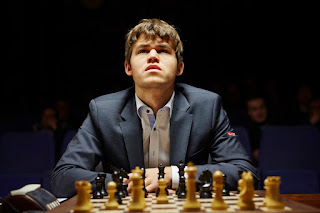 The life of the current World Chess Champion, Magnus Carlsen, comes under the spotlight in the new documentary, Magnus, showing at LFF next week...


As a young boy, Magnus Carlsen was very different from his peers. He usually sat by himself, lost in thought, and his parents, Henrik and Sigrun, were concerned about his relative development. When a strong interest in numbers made them realise that he could become a good chess player, they introduced him to the game at the tender age of 5. He soon started climbing the ranks of the chess world. At 13 he became the youngest grandmaster in the world, and began to wonder just how far he could go. Magnus’ father was told that the road to success in chess is paved with hard discipline and structure, but he refused to force Magnus into rigid modes of learning. Instead the family let him keep his playfulness, and nurtured his curiosity and fascination for the game. This approach, in time, strengthens Magnus’ best overall trait as a chess player: his brilliant intuition.

Ten years in the making, Magnus is the story of a boy who went from being bullied by his classmates to become the World Chess Champion. For a decade the filmmakers have captured the decisive moments of Magnus Carlsen’s life from the point, in 2004, when Magnus was 13 years old he made a decision: He would become the World Chess Champion. Featuring Garry Kasparov, whose record rating Magnus beat aged just 22, and Viswanathan Anand, whom Magnus beat to become World Chess Champion barely a year later, the documentary follows the prodigy battling his way through the ranks of chess, with personal sacrifices, special friendships and a caring family.

When asked about his inspiration for the documentary, Director Benjamin Ree said, “I found it immensely fascinating that no one I talked to understood how Magnus Carlsen had become so good – not even himself! He has studied the game in a completely different way than all the greatest chess players in history. He has been driven by playfulness and curiosity, rather than discipline and structure. I wanted to understand how Magnus’ brain works and discover who he really is on a deeper human level.

Magnus is showing at the London Film Festival next Monday and Tuesday, 10th & 11th October, before garnering a wider cinema release from 25th November.