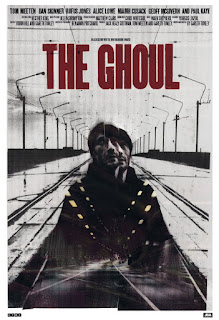 
Chris is a homicide detective, on the run and off the grid for mysterious reasons. On a visit to London he is shown round an old murder scene by colleague and friend Jim.

The double murder was a strange one: the victims didn’t drop on being shot but seemed to keep moving despite taking bullets to the chest and head.

On a hunch they investigate the property manager of the house where the murders were committed – in his luxury flat they find evidence of drug use and obsessively detailed charts and diagrams on the wall. On the charts are two names: Morland and Fisher. On further investigation the property manager turns out to have been seeing a psychotherapist called Helen Fisher.

With the help of an old colleague (and ex) Kathleen, Chris decides to go undercover as a patient to investigate Helen Fisher.

But, as his therapy sessions continue, the lines between fantasy and reality begin to blur…

That is how you make a film! I am not sure anything I say in this review will do Gareth Tunley, the film, the cast, or anyone associated with The Ghoul any justice at all. Superb film-making of the very highest quality.

The mental health issues that arise within The Ghoul are not just plot points, placed so we as an audience can get from A to B, they are integral to the fabric of the film, that by the way does not in any way allow you to go from A to B. The fantastic script is a genre hopping beauty. There is thriller, there is drama, there is small elements of science fiction, and glimmers of horror within a psychological story that is elegant and unique played out by a fantastic ensemble cast. Tom Meeten is an actor I know little about, except for the wonderful Crackanory a few years ago, and that helps as there is no bar set in my mind for what a Meeten performance should bring. As Chris, Meeten throws us all through the ringer of emotion. His dialogue is spot on but he has a physical and facial side to his performance that just makes Chris stand out as different. His friends are played by stars I only know from comedy which led to wonderful surprises from their performances and so Alice Lowe as Kathleen and Rufus Jones as Coulson bravo, I tip my hat to you. Niamh Cusack as Chris’ first therapist, Fisher, is as ever wonderful and towards the end shows quite an evil look you wouldn’t normally associate with her but Geoffrey McGivern as Morland has to share the accolades with Meeten for a performance that is stunningly brilliant, it’s not often I sit watching a film and find myself actually applauding come the end.

In the way that Stephen King and Philip K. Dick would give you a twist and, then when you think you understand, twist again Tunley does the same. Every time I thought I had got to grips with what was happening he threw me another curveball, and then filmed his story in a way that Christopher Nolan would have loved. In fact, if Nolan had made The Ghoul we would all be screaming for an Oscar nomination and I can’t think of a higher compliment to give to Gareth Tunley than that.

As a piece of cinema The Ghoul is superb. From the Twin Peaks-esque music at the start, through the rumbling bass, to the cinematography and wonderful views of London, everything about the look of The Ghoul is perfect to complement the acting and the incredible story. Gareth Tunley deserves any high recognition he is about to get and hopefully his star rises as high as Nolan’s does, plus thank you for the scene of Paul Kaye playing Paul Kaye, I miss that man on my screen.