Hallow-vent Calendar - Day 18: The Loved Ones 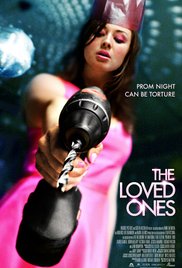 Welcome to our Hallow-vent Calendar; a horror-film-filled daily countdown to our favourite spooky celebration, Hallowe'en. For Day 18 David Ames loves The Loved Ones...

Australia is full of things that will kill you. On this continent, there are more deadly animals and insects than any other place in the world. With this kind of landscape, it is no wonder that some serious gems of the horror genre have come from the land down under. Modern classics like The Babadook, Wolf Creek, Snowtown, and Razorback have all made splashes in the horror community. Today I am ready to add another to that list – a film that I think surpasses all those I just listed.

In 2009, writer/director Sean Byrne gifted the world with The Loved Ones, a horror movie which delivers a new take on the spurned lover storyline. The film is gory and effective and, although not scary in a traditional, jumpy way, raises some questions and presents events that cause the mind to twist in on itself. It is a psychological horror covered in blood and guts.

The film follows a high school student named Brent who, after the tragic death of his father, has become withdrawn, focusing on drugs and self-harm as a way to cope with the grief. His girlfriend Holly is the only one who seems to understand and accept him as his mother is too busily buried in her own grief. On the last day of classes, Brent’s school holds an end-of-school dance. Brent is asked by outcast Lola but is told that he is going with his girlfriend. Normally, in a film like this, the rejection would be brutal and mocking and make the girl who asked so embarrassed that she loses her mind and we are given a revenge story. Byrne instead treats this in a friendly way. Brent says that he is sorry but that he is going with Holly. He is polite, respectful, and perfectly resourceful. This STILL does not prevent the ensuing gorefest from happening though, and we are all winners for that.

The torture and intensity that follows is insane and terrifying and done so well. The practical effects are excellent and the blood and gore, while excessive, do not feel over-the top. We are given wonderful homages to famous scenes like that of the Dinner table in the original Texas Chainsaw Massacre and the creepy, incestuous relationship featured in Girl, Interrupted. Everything about the movie past the exposition is genuinely creepy and disturbing.

Xavier Smith portrays Brent with the perfect amount of brooding and subsequent viciousness needed to really make his role believable. Smith, who I have only ever seen in The Twilight Saga: Eclipse was excellent-a true talent which I hope to see in more horror films as he obviously has the chops for this genre. That being said, Robin McLeavy, who plays Lola, was spine-tinglingly amazing. Her unhinged, deranged, obsessive portrayal of Lola is really what added the terror to the film. She manipulates her father, both mentally and sexually, and gets what she wants at all costs. We see her recreate the end-of-school dance including the crowning of the king and queen, and torture Brent with everything from hammers to knives to forks to power drills. How she didn’t win an award for this movie is beyond my comprehension.

The film is strangely funny as well, with perfect deadpan comedy at points and black, disturbing humour at others. It reminds me quite a bit of Excision which I reviewed earlier this week, in that respect. The humour serves its purpose but never, for a moment, does this film feel like a horror comedy. The funniest scenes are actually involving Brent’s inept friend as he dances, has sex with, and is completely in over his head with a goth girl. It’s funny and adds a nice reprieve from the brutality of the rest of the film.

Lastly, I think the music deserves a special shout-out here. It is a great score, understated when need be and intense when the film requires that as well. Ollie Olsen delivers the perfect score for the film and accentuates what needs to be while adding subtle movements to increase the emotion and action on the screen. Also, the continual use of the Kasey Chambers song “Am I Not Pretty Enough?” presents a great juxtaposition, always showing up while brutality is taking place. Besides the fact that it shows just how deranged Lola is, the song also raises some questions about why she hasn’t been told by someone that she is, in fact, pretty enough or good enough. At moments, you even feel somewhat bad for her.

This movie is one of the best I have watched this October and I am so glad I gave it a chance. It has received almost exclusively positive reviews and I am only happy to add my own to that category. It is funny and brutal and disturbing and just so, so good. If you like horror at all, this film is something that you really should enjoy. I know we don’t get everything Australia puts out here in the states but if this film is any indication of the sleeper hits over there, I want to make a trip and just watch your films. This movie is now, easily my favourite Australian movie, horror or otherwise.