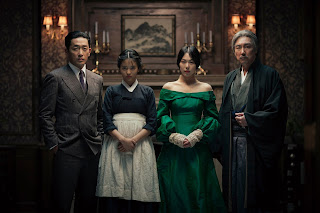 Park Chan-wook’s new film The Handmaiden, based on the novel Fingersmith by Sarah Waters is, like the book, a cleverly constructed and erotically charged thriller.

While Waters sets her story in Victorian England, Park sets his film adaptation in 1930s Japanese-occupied Korea. By replacing the class system of Victorian England with the hierarchical dynamic of occupier and occupied, Park has tapped into something just as complex and effective.

The Handmaiden is divided into three parts, each section augmenting the story and offering it from a different perspective. It begins with the story of Sook-hee (Tae Ri Kim), a pretty thief and pick-pocket, who conspires with an accomplished con artist – a handsome Korean posing as a wealthy Japanese aristocrat, who operates under the name of Count Fujiwara (a suave Ha Jung-Woo).

They plan to swindle the inheritance from an orphaned Japanese noblewoman, Lady Hideko (Min-hee Kim) and then lock her away in a mental asylum. Young Lady Hideko has been sternly raised by her uncle Kouzuki, who also has designs upon his niece’s fortune and upon whom the conman intends to exact a ‘vengeance-by-proxy’. Uncle Kouzuki’s huge house is a hybrid; half English manor (perhaps in deference to Waters’s original setting) and half traditional Japanese home.

Their plot almost derails when Sook-Hee enters the house as the lady’s maid and falls in love with Hideko, but she still persists in her attempts to persuade Hideko to elope with Count Fujiwara so that she can escape her stifling existence with her uncle. Hideko agrees to do so, but only on condition that she can take her maid with her. However, the first part ends with a double-cross that undermines everything seen so far and throws all into doubt.

In the second section we see the story through Lady Hideko's eyes and this includes startling revelations about her own character and about what her ‘training’ by her Japanophile uncle actually entailed. The film then becomes less of a story of theft by deception, and more a tale of revenge (which Park does so well) by the demeaned and objectified women at its centre. The third part reveals whose plan it is that really comes into fruition. 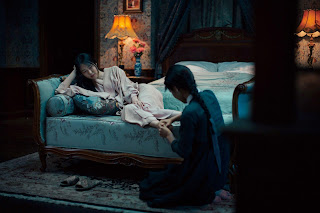 The two lead actresses give compelling performances, they are, as Count Fujiwara remarks in the film, ‘mesmerising’. Kim Tae-Ri is delightful as Sook-hee; a hard-boiled, smart-ass thief whose emotions get the better of her and who becomes the film's only trustworthy moral centre.

As the impassive object of desire, Kim Min-Hee is riveting. Sook-Hee refers to her as a ‘helpless innocent’ and subsequently as a ‘rotten bitch’, and she convinces as both, and adds further nuances with subtle and fascinating skill. Both of them adroitly and lightly convey even the most melodramatic aspects of the movie.

The Handmaiden allows the viewer to become captivated by the romance between these two women as their tentative advances grow into passionate encounters, but, the scenes of sexual consummation unfortunately indicate too obviously that we are watching a film directed under a straight male eye.

As director Park Chan- wook says, “While making the film, I constantly asked myself, 'Am I just making this film for the male audience so that they can gawk at two naked women? Is that the kind of film that I’m making, a movie to make a buck where I can show some nude bodies? Is it something the audience will see that way?' I constantly asked myself and checked myself.” Perhaps he should have asked Sarah Waters to check him instead? 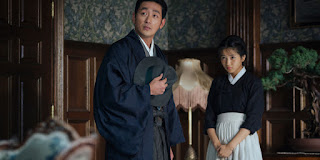 Admittedly, it is a difficult line to walk—deconstructing the male gaze does not necessitate prudery, but Park forgets about private, intimate, sexual joy and concentrates a little too much on the voyeurism. Possibly the most erotically charged scene in the film involves little more than a thimble and a tooth. When it comes to the subtext, some of the more difficult thematic questions are skirted.

The Handmaiden is difficult to define – it is imbued with sex, violence, revenge, double-crosses and perversion. This is a world in which everybody has a hidden agenda. The film’s twists and turns are dark, grotesque, occasionally surprisingly sweet and amusing, and the story expands far beyond its initial premise.

The Handmaiden is visually gorgeous, constantly captivating thanks to the lush, atmospheric cinematography, again by Chung-hoon Chung. The film offers the kind of material that brings out the strengths of Park Chan-Wook’s filmmaking, although here he is concerned as much with emotional as physical violence. The domestic setting hides many secrets which are gradually revealed, with the underlying currents of menace prevalent in Park’s work and, as ever, taken to extremes.