Film - Our Brand is Crisis 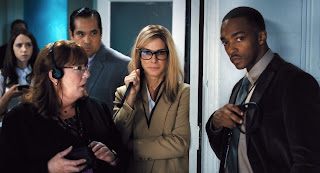 Steve Taylor-Bryant finally gets time to watch Our Brand is Crisis. No, we don't know what took him so long either...


I'm always nervous when I watch a Sandra Bullock film as I never know which version of Sandra I'm going to get. I adore serious, Oscar worthy Sandra. Films like 28 Days that leave a lasting impact on the viewer for whatever personal reason the performance touches. I don't like her comedy vehicles, Miss Congeniality is a wreck of a film, and I find I can't take her seriously in love films for some strange reason. Then sometimes you get a drama or a thriller and you're getting right into it and a comedy Sandra appears, even if just for one scene, and that the whole thing ruined for me. When you add in Billy Bob Thornton, who I only really like from comedy films (see Pushing Tin I beg you) to the cast and a film like Our Brand is Crisis is already teetering on a knife edge for me before I press play.

But the film is about politics and you know I love my politics so eventually I can't ignore the film and have to watch it.

Failing badly in the polls, a Bolivian presidential candidate enlists the services of an American management team for help. The main star is "Calamity" Jane Bodine (Sandra Bullock), a brilliant strategist who comes out of self-imposed retirement for a chance to beat her professional nemesis, the loathsome Pat Candy. With Candy working for the opposition, it becomes a down-and-dirty, all-out battle between political consultants, where nothing is sacred and winning is all that matters.

There is a lot of comedic elements to the film and they play okay, Sandra playing almost insane rather than the 'Calamity' of her characters name but not going overboard with it and Thornton is almost the straight guy in proceedings so the funny scenes are more light relief rather than an overwhelming influence. It's the human parts of the film that held my attention and I've never seen Sandra Bullock play vulnerable better than here, and I'm including 28 Days. The reason behind her losses in the past and her battle with manic depression are all self inflicted, she can't lash out at someone else with the blame, the catalyst for her undoing was her own actions and the weight of guilt that Jane Bodine carries is perfectly portrayed by a Sandra Bullock that I want to see more of.

The dirty behind the scenes look at politics, whilst based in Bolivia for this story, are a well known and widely used element in any race for power and the Latin American side of it seems to meld into our own western world the longer the campaign goes on. The battle hardened aren't scared of going negative early and the idealistic newcomers are quickly swept along by the others to accomplish the win they desperately want, and when the powerful break their promises to the electorate the 'well that's politics' message is a sad indictment of the world we live in with no one surprised, no one acting to retrieve the situation, it's just onto the next job.

This kind of film is funny if you only view it as a movie based in a corrupt Latin America but if you watch it as a warning to the whole world about what your political choices are up to then it becomes quite epic.