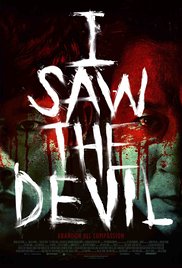 Welcome to our Hallow-vent Calendar; a horror-film-filled daily countdown to our favourite spooky celebration, Hallowe'en. For Day 12, David Ames enters the world of Korean horror and I Saw the Devil...

There is a small subgenre of drama/action movies which, although spawned in the 70’s, has found a resurgence in the last decade or so. The revenge film, first popularised by works like 1972’s The Last House on the Left and 1978’s I Spit On Your Grave, has since grown in both popularity and quality. The two films listed previous have seen remakes of more or less success and other, more mainstream and respected movies like 1994’s The Crow, 2000’s Gladiator, and 2003’s Kill Bill have pulled the genre into a different spotlight. One major player in this genre is South Korea who has released a string of revenge movies to international acclaim, namely Park Chan-Wook’s revenge trilogy consisting of 2002’s Sympathy for Mr. Vengeance, 2005’s Lady Vengeance, and the critical and commercially successful Oldboy from 2003.

Being in the mood for something of similar fare, I sat down to watch Kim Jee-Woon’s 2010 psychological-revenge-horror movie I Saw the Devil. I personally love Korean horror films and so, in 2011 I purchased this film and then it sat on my shelf, forgotten for all these years. Luckily I pulled it out for today and I am so happy to say that I was blown away.

The film follows a Secret Service Agent, portrayed wonderfully by Lee Byung-Hun (from The Good, the Bad, and the Weird) whose fiancée is murdered by serial killer, portrayed by Oldboy star Choi Min-Sik. The film follows the searching out, stalking, and eventual murder of that serial killer by the main character. The story itself follows the classic revenge horror archetype but that is where the similarities stop.

I Saw the Devil is on par with, if not surpassing, the level of gore and graphic violence seen in any other revenge film I have viewed. There are scenes of decapitations and dismemberment as well as a rather vicious murder with a hammer. The gore isn’t excessive and is quite realistic, bringing a very natural look to the film and making certain scenes even more unsettling. The most eerie for me was near the beginning of the film when police find the fiancée’s head in the water. It isn’t really graphic and there is no blood but as they turn her head over and her hair is floating beautifully in the water, there is something utterly disturbing about the image.

Acting wise, both main roles perform wonderfully. Lee plays the agent with gusto and reserve all at the same time, someone who is both sure of his abilities and torn about the actions he is performing. That being said, Choi is the real star here. His portrayal of the serial killer is unhinged and scary and altogether a different breed from Lee. The performances are perfect opposites and give the film a real balance.

The best quality of this film would have to be the cinematography. It is beautifully shot, on par with anything I have seen out of the Korean horror genre. From the David Lynch-like opening to Kubrickian dolly shots all the way through Hitchcock style transitions, Kim Jee-Woon gives us a movie that is both brutal in content and stunning/striking in visuals. If you have a chance to check out I Saw the Devil, do yourself a favour and take the time (about 2 ½ hours). The ending alone is worth the price of admission.