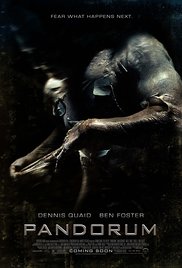 In the history of film, few genres have had a closer, more successful relationship than horror and science fiction. We can look back at such greats as Event Horizon, The Thing, Scanners, Alien, The Reanimator, etc. The list goes on and on. In recent history, we have been treated to beautifully well-done sci-fi horror films like Sunshine, Under the Skin, Prometheus, and the like. My favourite of that new breed of Sci-Fi Horror is easily Christian Alvart’s 2009 film Pandorum.

Anyone who knows me understands my deep and never-ending mancrush on Ben Foster. I think he is an incredible talent, so scarily intense at times and yet so vulnerable. If you look at his performances in Alpha Dog, The Messenger, 3:10 to Yuma, Hostage, and 30 Days of Night, you can see the range of his ability. I have for years thought that he would make the perfect Sith, honestly. But all of that aside, I went into Pandorum incredibly excited for his performance and I was not at all disappointed.

Pandorum takes place in 2174. The human population has expanded far beyond the capacity of the Earth and war has broken out to vie over the limited resources left on the planet. To counteract this, a large Ark-like ship called Elysium was launched, carrying crew and resources to setup a colony on the planet of Tanis. As the film begins, the ship receives a message saying that the ship is all that is left of humanity. An undetermined amount time has passed before two men, Ben Foster and Dennis Quaid, awaken from Hypersleep to a ship that is short-circuiting. The film then follows these people and other crew members as they attempt to survive and defeat the monstrous creatures which have invaded the ship and are destroying/eating the crew and their supplies. The best way I can describe the film is to say that it is a mix of Alien, The Matrix, Sunshine and Resident Evil.

Michl Britsch provides a wonderful soundtrack, full of haunting ambience and perfectly placed piano and strings. It is something that I actually still listen to by itself and it provides both intensity and peace while writing. The way in which it fits within the movie is perfect and adds just the right amount atmosphere and tension.

While Foster carries the film, there are other great performances from Dennis Quaid, Cam Gigandet, Antje Traue, and Norman Reedus. The supporting cast gives the film its strength as the crew struggles to survive against a seemingly undefeatable foe, very reminiscent of Pitch Black or Alien. The use of darkness to not only immerse the characters but to also add mystery and suspense is masterfully done.

If you love space and/or science fiction but are tired of the normal fare, Pandorum is most definitely for you. It is creepy, intense, mysterious, and it plays with and utilizes psychological horror elements to create a wholly different style of film. The sets look incredible as do the character and monster designs, but the performances are where the strength of this movie lies.