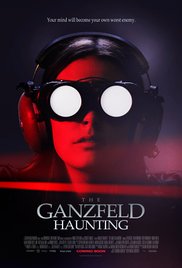 Welcome to our Hallow-vent Calendar; a horror-film-filled daily countdown to our favourite spooky celebration, Hallowe'en. For Day 22, David Ames experiences The Ganzfield Haunting...

There will be very few times in life when you will come across a movie that will change things for you. Sadly, today was not one of those days. I LOVE horror movies. I mean, I have a strange obsession with them, especially bad, campy B movies. These B movies can really only go one of two ways: 1) they are terrible but embrace it and so they become fun or 2) they think they are amazing and take themselves way too seriously while failing at basically every aspect of film-making. I picked up 2014’s The Ganzfeld Haunting in hopes of finding the former but instead, what I found was so far into the latter category that it hurt me.

The Ganzfeld Haunting follows a group of college students who are performing a Ganzfeld experiment in a widely regarded haunted house in their area. A Ganzfeld experiment consists of testing a subject for extra sensory perception through a series of tests. These students begin to perform this experiment and nothing happens so they party instead. Shenanigans ensue until they realize the house is full of something more than spiders and cobwebs. Spirits from their past come back with a vengeance and lead to an ultimately bloody ending.

In my explanation of the plot, I tried to be as kind as possible. If you have read my reviews this month, you know that I try to find the best aspects of each movie, even if overall I didn’t like the film. This review is going to be different because there were really no bright spots. The acting was wooden and forced, bordering on a high school stage play without the budget. The set design was simple and, while that could be explained and even tolerated, the camera movements through the set were so boring or lackadaisical that the movie suffered even in that aspect.

From here, the plot gets even more muddled as everyone gets drunk and they begin to film the girls making out and eventually moving toward more. The couples branch off, start making out and then the ghosts show up. Evidently, there is some terrible tie between Beckett and the house; she had lived there as a child and something terrible happened. The plot was almost unfollowable and had a bunch random ass shots of Willis and Cole, so out of place that it felt as though I was watching a late 80’s or early 90’s rap video.

In the end, everyone dies and when the hilariously stereotypical detectives show up, everyone is posed in death. There is no rhyme or reason as to why this has happened and the movie suffers from every aspect: filmmaking, acting, story. It is basically a train wreck. It hurts me to say this because I do genuinely enjoy parts of everything that I watch—I love movies. Sadly, I can’t say that today. The movie is just too rough. If, after reading my review, you decide that you want to give it a shot, go for it. By all means, watch it and hopefully enjoy it. I just hope that the rest of October has something a little better to offer.