Audio - Doctor Who: Sisters of the Flame/The Vengeance of Morbius 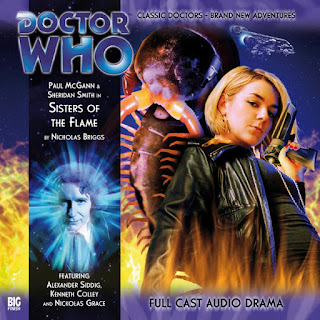 Our Doctor Who audio expert, Tony Cross, delves into the back catalogue available from the Big Finish website. Today is the Eighth Doctor and Lucie adventures Sisters of the Flame and The Vengeance of Morbius...


With Sisters of the Flame - The Vengeance of Morbius another season of the Eight Doctor and Lucie Miller comes to an end. And it ends on a fine cliffhanger too, which I will try not to spoil.

Sisters of the Flame is effectively a Doctor lite story as the Doctor 'disappears' after dodging the Time Scoop, arriving on a mysterious space vehicle and getting grabbed, which leaves Lucie all alone. She's scared and worried, which makes her even more belligerent than usual.

Especially in her scenes with Rosto, the Giant Centipede Police Officer, who is bought in to investigate her stowawaying. Rosto (played rather brilliantly by Star Trek: DS9's Alexander Siddig) turns out to be a great character and after he rescues Lucie from an attempted kidnap attempt Lucie and he form a team.

Investigators a-go-go. And Lucie apologises to Rosto for some rather unpleasant language she used on their first meeting.

Sheridan Smith is brilliant as Lucie Miller. All fizz and fight, although she does basically walk into her own kidnapping through failing to pay attention to passing Time Lord Straxus (Nickolas Grace).

It's the Time Scoop and Straxus that indicate the full risk of what's going on. The Time Lords appear to be in full flight. Gathering up every Time Lord they can find and bringing them back to Gallifrey.

In the meantime it appears that the Sisterhood of Karn (actually based on this story they should really be known as the Sisterhood Formerly of Karn as they've been booted off their own planet by billionaire Zarodnix (Kenneth Coley) to make way for....well...you can probably guess.) have been killing every Time Lord that falls into their hands, which is rather scooted over except that its clearly made at least one of them incredibly blood thirsty.

It turn out they've got the Doctor. And they want Lucie too. They want the Doctor and Lucie to kill them and they want that because Zarodnix is trying to bring Morbius back. Hence the Time Lord panic and the Sisterhood's murderous spree. It's not good. 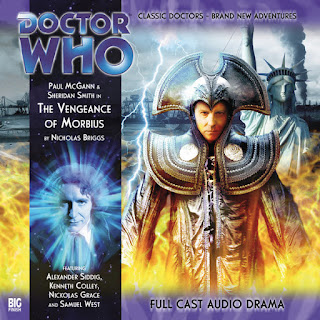 The Vengeance of Morbius brings us in touch with the new, improved not quite Chop Suey Emperor Morbius, played with the right combination of intelligence, arrogance and cold blooded madness by Samuel West. Who is rather good.

I won't tell you how Morbius is bought back. Or how the Doctor defeats him. Or what happens. Just to say that there's some very clever stuff in The Vengeance of Morbius including a serious bit of timey-wimey stuff.

It's nice to get another glimpse of Morbius. I've always found him rather intriguing as a villain and in The Brain of Morbius we don't get to see him at his best. I think the television series has been uncomfortable about re-visiting him because of all that stuff about past regenerations when the Doctor and Morbius go mind-to-mind. There's controversy about who they are, although I think it is clear that the production team meant them to be earlier incarnations of the Doctor as an in-joke. Obviously no one expected us to analyse the story to death so it was just supposed to be a throw away moment but alas not.

However the point is whoever the current showrunner is can easily just turn around and say, "Sorry, they weren't the Doctor. Don't worry about it. Nothing to see here. Oh look and Morbius is back." Continuity is what we make of it.

Next up I'll solve the UNIT dating problem.

Anyway...back to the story. Everyone seems to be having fun. There's some good performance, its nicely paced over the two stories being all about the setting of scene, introductions and explanation in the first episode but increasing the tension nicely as we hit the end of The Sisters of the Flamebefore picking up speed, tension and pathos as we make our way throughThe Vengeance of Morbius before ending rather brilliantly.

So listen and enjoy. The Eighth Doctor and Lucie Miller stories are turning into something rather good.

McGann seems to be enjoying and to me he is THE Big Finish Doctor. All the others got - decent-ish - runs of television episodes whilst poor old McGann got Doctor Who: The TV Movie. So to me if you want to see the potential of McGann's Doctor you need to listen to his Big Finish stories.

And actually I'm starting to think that audio is the great medium for drama. It requires a bit more concentration, a bit more effort and allows us as listeners to stretch our imaginations in order to 'see' what's on offer, such as Giant Centipede Police Officers. It pays careful listening. It rewards it.

So if you haven't already listened to the Eighth Doctor audios do so now. That is an order.