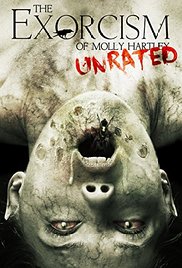 Welcome to our Hallow-vent Calendar; a horror-film-filled daily countdown to our favourite spooky celebration, Hallowe'en. For Day 28, David Ames gets some exorcise...

As we inch closer to the final day of this Hallow-vent calendar, I wanted to entrench myself in the darker side of horror. I have always been a huge fan of exorcism movies. As a somewhat religious person this subject matter has always made me both uncomfortable and interested and these types of films are the only movies that really freak me out (other than clowns—fuck those guys). The Exorcist is easily my favourite horror movie and it still holds up remarkably well. Sadly, while that film still holds up after forty-three years, the movie I watched today, 2015’s The Exorcism of Molly Hartley couldn’t even hold up for one. In the words of Bloodydisgusting.com’s Trace Thurman: “It is the sequel that no one asked for.”

The movie itself is an ill-fated, title-only sequel to the forgettable 2008 supernatural occult thriller The Haunting of Molly Hartley. The film opens with an exorcism gone wrong. A dishonoured priest, Father John Barrow, has been locked up in an institution for the death of the woman and other priest during the botched exorcism. Meanwhile Molly, now twenty-four, is incredibly successful, having just made partner at her law firm and so, naturally, she goes home to have sex with a couple. When she wakes in the morning, the police are there and after they investigate the home, they find the couple slaughtered in the bathtub. Molly doesn’t remember anything but she is hearing strange sounds and we are led to believe that she is possessed. She is sent to a mental institution for evaluation and this is where things begin to happen—classic signs of possession such as vomiting, multiple voices, knowledge of the unknown, and control over the weak. Coincidentally, Father Barrow is in the same institution and after Molly’s doctors can do no more, they come to him for help.

The plot synopsis is bleak enough to understand the issue with the film. Exorcism movies already walk a tight line between scary and hokey, between terror and comedy, and this film falls squarely into the latter category. Every scene is a trope, poorly performed and unoriginal. Even the music feels like it was stolen from Halloween, The Exorcist, and Rob Zombie’s Halloween. The imagery is the stereotypical low budget upside-down crosses and 666 this, and flying objects that, and basically everything you’ve ever seen in an exorcism film but done poorly. On top of all this, there are also scenes which were stolen directly out of other, more famous movies. The puke scene is basically just b-roll footage from The Exorcist. The title alone appears to be pulled from a far greater movie, 2005’s brilliant The Exorcism of Emily Rose.

None of the plot points really make sense. How would they both wind up at the same mental facility when their crimes were so different? Why would this institution be coed? Why would a doctor allow another, clinically insane man to perform an exorcism on a dangerous patient when that is what he was sent to the institution for in the first place? Why would he all of a sudden be allowed to go free after being handed down a verdict from a judge? None of this adds up.

On top of the terrible writing, the dialogue is hilariously laughable. Lines like “No Molly, Only Us” and “You will always be a fool for the flesh” show just how poorly the writers created this story. We are even given a pep talk by another priest who says that Barrow should perform the exorcism because “you don’t have to be in the NBA to play basketball.” Seriously…that’s a line in this thing.

The performances surprisingly aren’t that bad. All of the characters do what they can to try and salvage this trainwreck and there is not one actor who is wholly bad. The worst acted scenes come from Sarah Lind (Molly) and they aren’t even her fault. She seems to be doing okay but the dubbing is tracked and synched so poorly that it actually hurts her performance more than helps it.

Lastly, the false ending kills me. The movie could have just quit while it was behind but when I looked at the clock after what appeared to be the ending, there were still 24 minutes left. I wasn’t sure how much worse the movie could get, but in a strange sort of way, we were gifted (tortured?) with even more unoriginality. The ending itself is as ridiculous as the rest of the movie, a sort of throwback or pull from Rosemary’s Baby or The Last Exorcism but without any of the immediacy or success. This film is not great and in fact, may be one of the worst I’ve watched this year but the bright spots (the performances and the look of the film) help to keep it above Bleed or Starry Eyes. It isn’t great but it isn’t the worst. Just don’t spend money on it if you can avoid that. Instead, just watch it somewhere so that you don’t give this studio any more money. Instead, go watch a good exorcism movie: might I suggest The Exorcism of Emily Rose?