Hallow-vent Calendar - Day Six: We Are What We Are 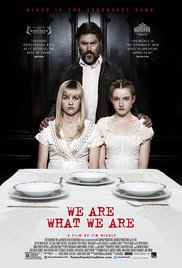 Welcome to our Hallow-vent Calendar; a horror-film-filled daily countdown to our favourite spooky celebration, Hallowe'en. For Day Six, David Ames decides We Are What We Are...

I may be alone when I say that there aren’t nearly enough cannibal horror films. When I say cannibal, I don’t mean Zombies but just regular people who eat other human beings. It’s a small subgenre of horror that, when done correctly, can be quite effective. It straddles the line between zombie, slasher, and body horror and adds in a dose of torture porn for good measure. Today, I sat down to watch Jim Mickle’s 2013 We Are What We Are, a remake of the 2010 Mexican film of the same name. This movie crept up on me. There were some flaws in the process but overall, it was fun and creepy and effective and led to a disturbing and unforeseen ending.

This film follows a set of sisters, Iris and Rose, who live under the patriarchal and authoritative rule of their devoutly religious father. Their little brother Rory is in the house as well and is cared for mainly by the two sisters. As the film begins, we see the matriarch of the family die suddenly from a brain aneurism. What follows is the grieving process of a family cut off from society and forced to live by the twisted tradition of its ancestors. The father forces the children to follow the family way which, if you read above, includes the eating of human flesh. I don’t want to give too much away but be warned that there are moments in this film which will turn the stomach—and those moments aren’t even gory.

All of the actors and actresses perform wonderfully, especially the ever-amazing Michael Parks, but the true star of the show is the domineering father, portrayed by Bill Sage, who is genuinely terrifying. There is little to no gore in the film but what is shown is enough to satisfy most who are fans of psychological horror. Also, let me just state again that the ending is amazing—the perfect cap to this film.

There are some serious issues, mainly with pacing and tempo. The film drags a bit and seems to lose focus, with characters making huge leaps in thought to bring about the end of the film. All of that can be overlooked though, as the movie is beautifully shot, once again, much like The Witch, utilising mostly natural light to create a creepy and eerie atmosphere. The end of the film leaves us wondering what could come of this group of outsiders and their “unconventional” way of life.

This film may lose some steam in the middle but do not let that detract from the amazing ending and the thought-provoking themes which dwell on the questions of tradition and religious zealotry, as well as blind faith in family practices. Check out We Are What We Are and enjoy!