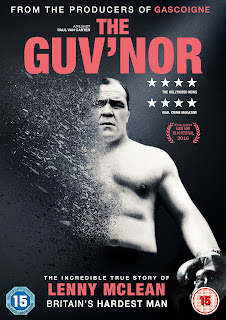 Steve Taylor-Bryant delves into the life of Lenny McLean as seen through the eyes of his son, Jamie, in the new documentary from Paul Van Carter and the producers of Gascoigne…


When you grow up in the era I did and have London blood in your veins from extended family it is impossible to not know the name Lenny McLean. When the opportunity to review The Guv’nor came I up I jumped at the chance for two reasons. The first was I had really enjoyed ‘Gascoigne’ and this was the same producers, and the second being that I love to hear Lenny’s voice, but I wasn’t going to learn anything new was I? Wrong!

The documentary is made by Jamie McLean, Lenny’s son, and offers a fascinating insight in to what Lenny was like behind the legend, what growing up as Lenny’s son was like, and has some extraordinary footage of some events in Lenny’s life that really need to be watched. Considering it is a family member making the film they have not shied away from the obvious faults Lenny had in life, the controversies and, of course, the violence that surrounded him. Yes Lenny McLean was a hard man, possibly the hardest we have ever known. A man that had an inner strength to back up his incredible punching power and an ability to take a beating like no one before him. The Jimmy Briggs fight outside a pub, which was one of Lenny’s most notorious moments, gets a mention and the fact he tried to bite out the man’s throat and spat up human flesh is neither glorified nor retreated from. The abuse that Lenny received at the hands of his stepfather as a child is discussed in depth and painful to sit through but never once used as an excuse. In fact the sections of the documentary that are outside of the boxing or media work aren’t glorified in anyway at all and that is refreshing for me as a viewer. This isn’t a son showing off that his dad is harder than your dad, this is a son with obvious love for his father that is trying to see if there is a reason behind the violence, a son not afraid to tackle his famous fathers OCD and mental health issues, as well as discussing his own demons and if I could say one thing to Jamie McLean it would be – Bravo sir! Very brave of you and a fascinating look at the life of both your father and you as his child. 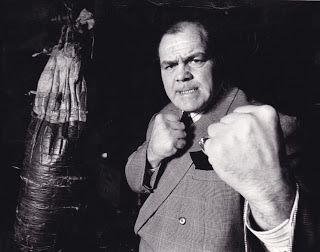 The section on the documentary about the famous unlicensed fights with Roy Shaw was brilliant. Roy Shaw, for those who don’t know, was an ex-professional boxer who had been certified insane and spent time in Broadmoor where he tried to escape his cell using only his head. That reputation and his natural fighting abilities had led him to be the king of London’s unlicensed boxing scene on his release. He used the title ‘The Guv’nor’ which Lenny McLean’s stepfather had used and was like a red rag to a bull to Lenny who immediately set after him and a fight was arranged. Lenny was a hard man but had no actual fighting skills and lost the first fight. Determined to not allow that to happen again Lenny set up a makeshift gym in a scrapyard and trained pretty well going on to knock Roy Shaw through the ropes in the second bout. Shaw used an excuse about herbal tea sedating him and a third match, the decider was set up. Lenny trained like a professional boxer. Got fit, learnt proper fighting skills, listened to those who wanted to help him and destroyed Shaw in the fight. This section was a proper Rocky rags to riches story and both interesting and a complement to more brutal stories contained in the film.

Working the doors of West End clubs allowed Lenny a decent income and his name spread fear amongst the ‘jack the lads’ that would try and stir trouble in places but one fateful night at The Hippodrome saw Lenny charged with murder. A mental patient from Manchester had escaped and found his way to London and inside Lenny’s club where he stood naked and urinated on the crowd. Lenny being the bouncer he was gave the guy a swift back hander, breaking his jaw in the process, dressed him and sent him on his way. Lenny was arrested a few days later for murder. When the trial hit the Old Bailey a forensic pathologist stated that the broken jaw was not the cause of death but instead brutality on behalf of the police, seconded by a nurse who had witnessed the police dealing with the man. Lenny escaped the police witch-hunt, got off the murder charge but still served time in Wandsworth for GBH. After his release Lenny became a minor celebrity. His book was eventually picked up by a publisher and sold over 3 million copies, he had small parts in television shows, did the chat show circuit, and eventually found fame in Guy Ritchie’s gangster film Lock, Stock, and Two Smoking Barrels. Lenny unfortunately died soon after from brain cancer.

The insight that Jamie gives, alongside fight footage, family pictures and video film, and television archive material, paints a very different picture to one you may have about Lenny McLean. Yes he was incredibly violent when he had to be, but this was also a man who tried to fix his own faults and look after his own.

The Guv’nor: The Incredible True Story of Lenny McLean separates the myth from the legend and doesn’t hide the brutal. It also celebrates the good and is a wonderful watch and great look at a man who went from nothing to everything.