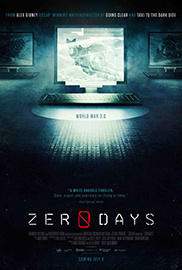 As with all Alex Gibney documentaries, I went in expecting one thing and got much more than I bargained for. Zero Days interested me due to my fascination with all things cyberspace. I wanted to know about the Stuxnet computer virus, and I certainly learned a lot, but Gibney is one of those filmmakers that doesn't stop when he's got his story. Instead he finds a tiny detail that makes him think 'wait a minute' and then digs deeper, opening up avenues you weren't expecting and he wraps it all up in a very cinematic package, letting you digest the information and make your own mind up with your own ethics and principles in place. He always makes me think, he always makes me feel educated without being talked down to and he always entertains me. Never before though has an Alex Gibney film left me feeling frightened.

For those who don't know the background, Stuxnet was a malware virus discovered by specialists who tried to investigate where/when/how it originated. Clues in the coding, kill dates and the like, lead us to believe it was an aggressive worm designed and implemented by U.S. and Israeli agencies to cripple Iran's nuclear capabilities. This is what I went into Zero Days expecting, a modern espionage tale. Iran has no doubts who the perpetrators were and the Stuxnet virus didn't have the effect that "whoever" launched it wanted. It added a steel to an already stubborn nation. Iran has more nuclear inspections than any other nation and, to be fair, whilst they publicly grumble they never hampered an inspector, but the attack on their centrifuges, which is a hideously dangerous attack anyway, made them determined to up their progress. The side effect of this was they also built the biggest cyber army of any country and went out and proved their power by hitting where they thought the blame lay and attacking American banks. Eventually old fashioned diplomacy prevailed and Iran got around a table in Lucerne with U.S. and the British and some other nations and agreed to dial back their enrichment capability. 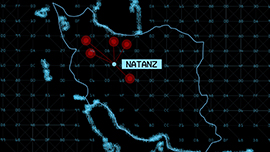 What happened though, and where the film becomes frightening (because a nation with nuclear capabilities isn't frightening enough,) is the extent to which Western governments utilise and build their cyberspace weapons. A lot of the official governmental and military personnel interviewed on camera hid behind their Top Secret mantra, with one exception. Former CIA and NSA director Michael Hayden said cyber stuff is hideously over classified. He didn't know the ins and outs of this particular piece of warfare (and if you think messing with another nation's nuclear power isn't a gross act of war then you're flat out wrong, never mind your thoughts on that particular nation) but genuinely thinks countries need to be less secretive and more open, especially in the modern age where strokes on a keyboard can end the world. A former CIA and NSA director... be more open... let that sink in a moment.

An actress, hidden from the public with some impressive imagery, speaks a script written by NSA leakers, who are worried about how far their country will go with cyber attacks. The defence of cyber security, that President Obama spoke of when he came to power, is shown to be a lie with documents and testimony that show that the Intelligence Agencies budgets were for offensive reasons. We all know, thanks to the Edward Snowden's revelations, that the U.S. Government will go to the ends of the earth for their spying capabilities but now, right on top of the NSA, is another clandestine government agency that has the power to act upon the information seized by the company below them. Stuxnet, or Olympic Games as we learn it was called in NSA circles, was not a one off. There were numerous versions of this virus, some slowed the centrifuge to almost standstill, others sped them up to extreme rates, but the frightening thing for me is that one little tweak in that coding, one mistake by a tired operative, and the world could have had a catastrophe that would make Chernobyl look like a chip pan fire.

These agencies, in their race for supremacy in a digital age, are playing with everyone's lives, not just those they consider a rogue state. With the alleged Nitro Zeus programme, developed by the NSA and others, we are now in a world where governments are fighting wars in cyberspace as well as with boots on the ground. This is an astonishing film and Alex Gibney has opened my eyes to a world that seems more frightening today than it did even yesterday.