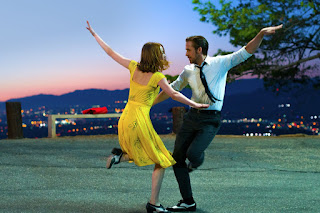 There's a new Behind the Scenes featurette out for La La Land...

Written and directed by Academy Award nominee Damien Chazelle, LA LA LAND tells the story of Mia [Emma Stone], an aspiring actress, and Sebastian [Ryan Gosling], a dedicated jazz musician, who are struggling to make ends meet in a city known for crushing hopes and breaking hearts. Set in modern day Los Angeles, this original musical about everyday life explores the joy and pain of pursuing your dreams.

In this featurette the cast and crew talk about what drew them to the film and why the casting works so well. And you can find out what Ren Zelen thought of the film when she watched it as part of LFF this year by reading her review.

La La Land is released in cinemas across the US on the 16th December, after a limited run starting on the 9th, and in the UK on 13th January, which is when the sound track also gets released.