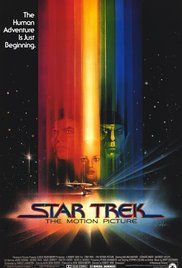 Our small band of Gunters here in The DreamCage universe are reviewing every film mentioned in Ernest Cline's Ready Player One. This week Susan Omand goes where no man has gone before...

I guess you could call me a bit of a fan of Star Trek in all its various incarnations. I adored DS9 and TNG, got a lot of fun out of Voyager and I was the one who watched Enterprise. However, I have a bit of a confession. Of all the Star Trek TV series, my least favourite is the original one. (Waits for internet outrage to subside). It may be because I was watching them for the first time on re-runs in the mid 1970s, but they never felt new or different to me and had become a bit of a laughing stock, however lovingly, with the characters becoming caricatures, ripe for parody, and the show was never really treated seriously as sci-fi when I saw them.

The same, however, cannot be said for the films and I enjoy them all for different reasons. Far from being the “extended episodes” that the Next Gen films tended to turn into and the CGI-fest that the remakes, although incredibly well cast (apart, obviously, from Pegg – WHY???!!!), have become, the original Star Trek films, yes even the whale one, stand head and shoulders above the rest in terms of story and character. I think it’s because they were SO different from the episodes, they WERE new and different and treated seriously, at least in the beginning, and gave plenty of time and scope for the story to develop while giving the actors a chance to portray a previously unseen depth to their characters.

I know people go on about the second film, The Wrath of Khan, being the best and most important film in the franchise but you really need to spend time again with this, the first, film. At the time it was released in 1979, there had been no Star Trek on TV for a full decade and Star Wars was riding high, with A New Hope reigniting the interest in science fiction for the masses. As I’ve already said though, the Star Trek characters had become parodies and the cult following of true fans, although rabid, was incredibly small especially outside the US, so there was a LOT riding on getting the tone of the proposed film right. It needed to be serious. It needed to be believable. It needed to please the series fans and it really needed to pull in the next generation (no pun intended). And, with The Motion Picture, they managed it.

I had forgotten how bloody good this film is. The effects, although now ropey looking back, were absolutely cutting edge at the time. The dialogue was not cheesy, never played for laughs, and made no assumptions while not being over-explained. I loved the fact that the Klingons and Vulcans in the opening scenes spoke in their own languages (not everyone in the known universe speaks English, you know) and I absolutely loved the ships. Even now, the first ominous appearance of the Klingon Birds of Prey strikes fear into this heart and, likewise, that first glimpse of the refitted Enterprise in its space dock makes that same heart still flutter with a joy unbound, with the hindsight of what the film, and the franchise, was going to go on to do.

The plot, adapted from a story by the much revered science fiction author Alan Dean Foster, was richly wrought, with the right level of physical action and psychological intensity without overplaying either. I also think the choice of “baddie” for the first film was of paramount importance and it was a very brave decision not to go for a known adversary but, instead, to use a non-corporeal intelligence, V’Ger, as the enemy to add to the suspense and fear factor. The biggest fear, after all, is fear of the unknown and the reveal when it comes is still very clever. As well as the cinematography and effects, Jerry Goldsmith’s stunning soundtrack augmented the film so much, adding to the heightened sense of fear and anxiety one minute and providing an almost instinctive rush of softer emotions the next.

The brilliance with this film for me, though, is not necessarily the fear, the effects, the action or even the plot itself. It is that, like all truly great science fiction, Star Trek: The Motion Picture gives us an indepth study of the human condition, in all its forms, with the superb character development. No longer were these crew members to be laughed at or parodied, instead the Enterprise and its inhabitants became the microcosm of society that it needed to be, reflecting the good and the bad in all of us back to us from the big screen, letting us, the viewer, finally and legitimately fall in love with the original team, Kirk, Spock, Bones, McCoy et al, and with Star Trek itself as a serious, believable, science-fiction contender.